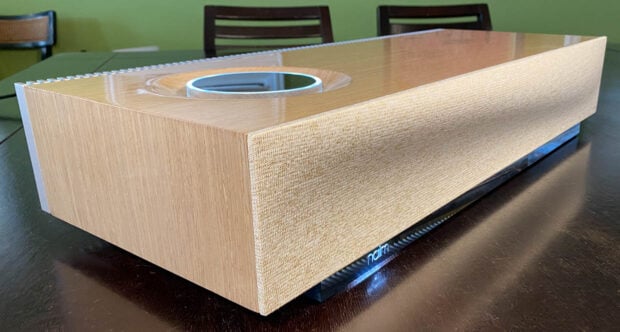 You may or may not be familiar with audio equipment maker Naim, but they’re known for high-end component audio gear, as well as the exquisite sound systems found in Bentley automobiles. Their Mu-so speaker system aims at the more casual home user while retaining the premium sound, aesthetics, and build quality the UK audio maker is known for. The Mu-so is now on its second generation and comes in a fantastic looking new Wood Edition that gives the all-in-one sound system a light and airy new look. 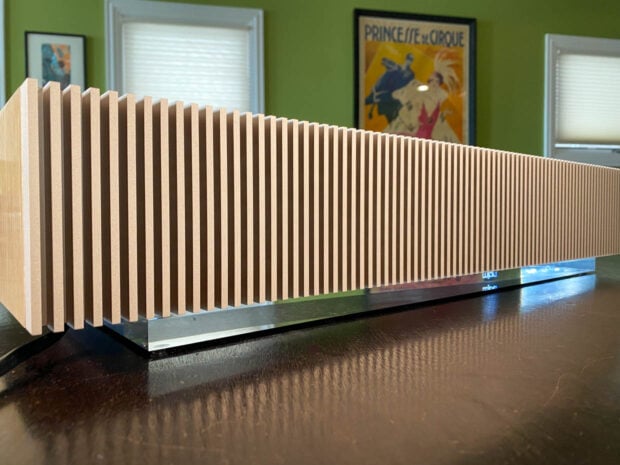 Everything about the design of the Mu-so Wood Edition is a class act. Measuring  24.7″ w x 10.4″ d x 4.8″ h, and weighing 25 pounds, you can tell just from its heft how substantial this thing is. It’s built from a sustainable wood called Ayous, which has been coated to a mirror-like shine with a thick lacquered finish. The grille of the Mu-so has an undulating shape reminiscent of an ocean wave, and a light-colored grille cloth that complements the wood beautifully. The whole thing sits atop a crystal clear acrylic base that gives the speaker a floating appearance. If darker colors are more your thing, be sure to check out the Naim Mu-so for Bentley Special Edition. Even the rear of the Mu-so is a work of art. Its exposed heat sink offers a sort of architectural look as it spans the entire rear of the unit. You’ll notice that no ports are exposed on the back of the system either. Instead, they’re hidden on its underside. 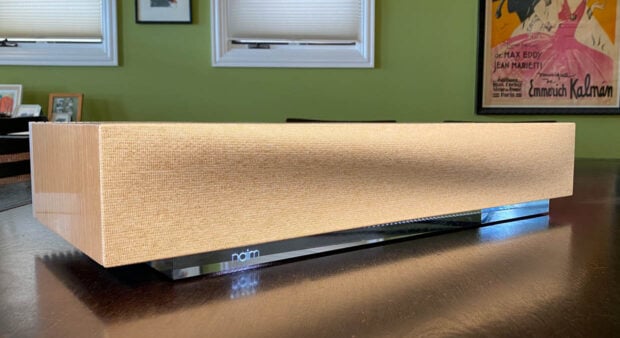 Inside of this elegant box, you’ll find a six-channel amplifier that pushes out 75-watts per channel for a total 450-watt output. Naim doesn’t provide detailed specs on the speaker’s six drivers, but it’s a three-way configuration, with separate drivers for bass, midrange, and treble. Two low-frequency speakers are placed at the center with two high-frequency speakers at the ends, and two mids placed in between – an arrangement that helps to widen the Mu-so’s soundstage. 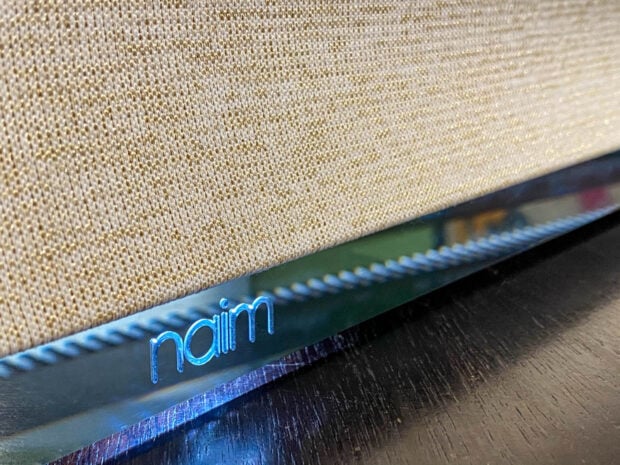 Those amps and speakers work in concert with a high-speed digital signal processor (DSP) to help get the most out of your music. The sound it produces is notable for its crispness and clarity. Naim is so confident you’ll enjoy the natural and clean sound that there are no equalizer controls, other than a loudness setting and room compensation which can improve the sound if you place the speaker near a wall or corner. The good news: Naim’s audio engineers know what they’re doing. There’s tons of nuance and detail to be heard, especially when it comes to analog instruments and vocals. I’m also impressed with the Mu-so’s ability to achieve a room-filling volume level without harshness. 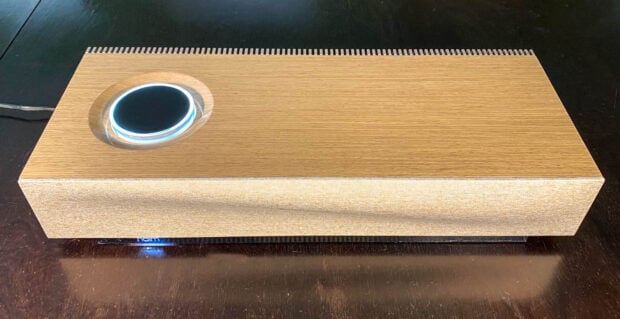 Dimensionality and soundstage are pretty great as well, giving music a sense of scale that will have you wondering if you have surround speakers behind you. The overall sound quality here is stellar and especially well suited to jazz, rock, folk, and country music. Some of the tracks I played that really show off what this speaker can do are Tom Waits’ Way Down in the Hole, Chicago’s 25 or 6 to 4, Hall & Oates She’s Gone, The Beach Boys God Only Knows, and The Roots’ Double Trouble. The Mu-so also can serve as a sound system for movie and TV viewing. While I was testing out the speaker’s Chromecast and AirPlay 2 capabilities, I streamed some scenes from Ready Player One and Inception and was yet again impressed by the dimensionality of the sound. The surround effect isn’t a replacement for a dedicated home theater sound system, but if you’ve got a living room where music comes first and video comes second, the Mu-so is a good choice – assuming you have a shelf to place it on under your TV. 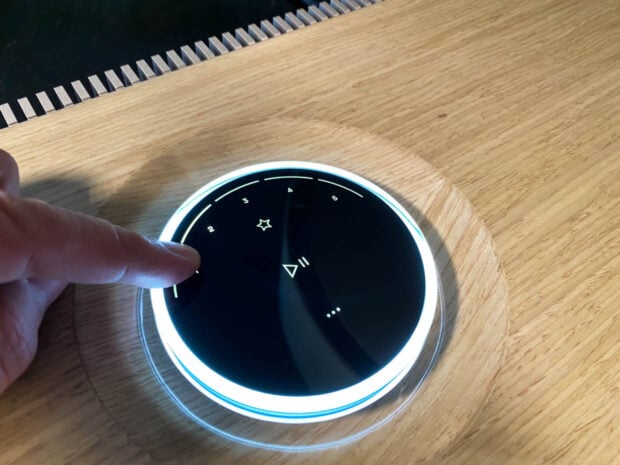 Interacting with the Mu-so is also a pleasure. The speaker’s user interface consists of a single large dial on its top. The illuminated outer ring acts as a volume control. When not in use, the disc in its center remains black. Hover your hand over it, and a hidden touch panel comes to life. Here you can pause and play music, access five station presets, and switch between inputs. These commands are also available in the included remote control and via the free Naim app. 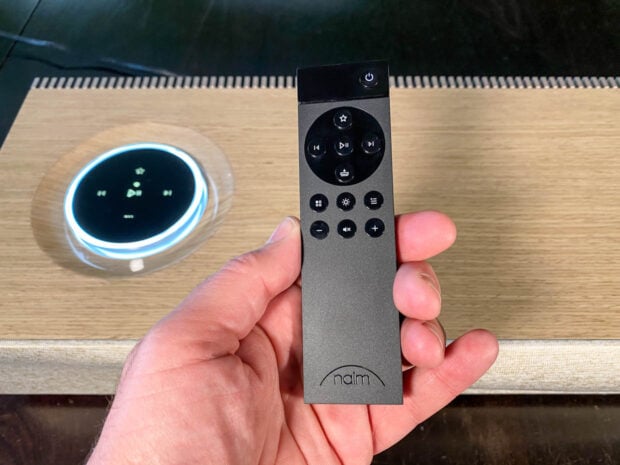 That app provides quick and easy access to Spotify, TIDAL, Qobuz, music servers, and numerous digital radio stations, including many with HD streaming for maximum audio quality. It also serves as a control panel for speaker settings. But with the aforementioned AirPlay 2 and Chromecast support, I spent very little time in the Naim app and instead used native music and video player apps to control my wireless audio sources. 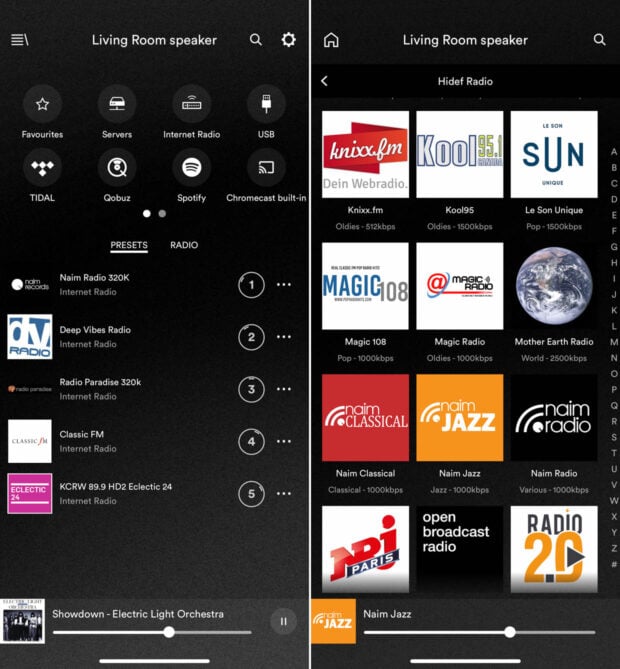 In addition to digital streaming, the Mu-so supports Bluetooth audio and has HDMI ARC, 3.5mm analog, and S/PDIF optical digital inputs. Sound quality using Wi-Fi streaming services is so good these days that I was hard-pressed to tell any difference in quality when connecting local devices as sound sources. There’s also a 100 Mbps Ethernet port in case you want to hardwire it to your network, and USB port on its side for playing local digital files. 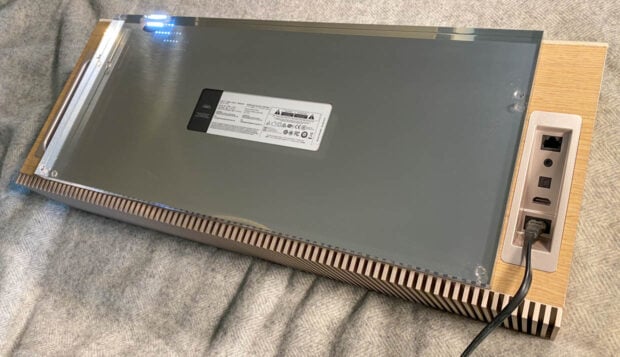 The Naim Mu-so is a beautifully designed piece of audio hardware that looks every bit as good as it sounds. Its style exudes luxury, as does its audio quality. If you’re in the market for a high-end sound system that doesn’t require multiple components and that will do your music collection justice, the Mu-so is well worth a listen. The Mu-so Wood Edition is available now from Naim Audio, and is priced at $2,290. 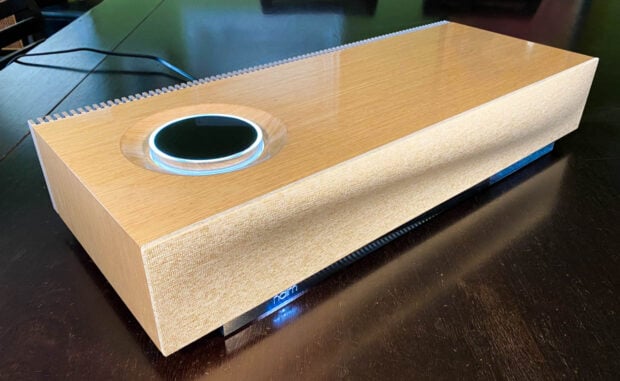