The 1990s Hot Wheels PC: it made the top of my Christmas list three years in a row, and I never got one. But enough about how expensive therapy is now, below is a video of Shank Mod’s journey to pack a top-of-the-line gaming PC into the body of one of those bright blue PCs with the flame job. And what a journey it is! You know they say every journey starts with a single step, but I’ve started many with a stumble and skinned knees.

The original Hot Wheels PC came with an Intel Celeron 333MHz processor, 3GB hard drive, 32MB of memory, a 56k modem, 32X CD ROM drive, a 15″ CRT monitor and ran Windows 98. It retailed for $899 and was worth every penny as far as I was concerned. Of course, it’s basically an electric-powered rock by today’s standards. 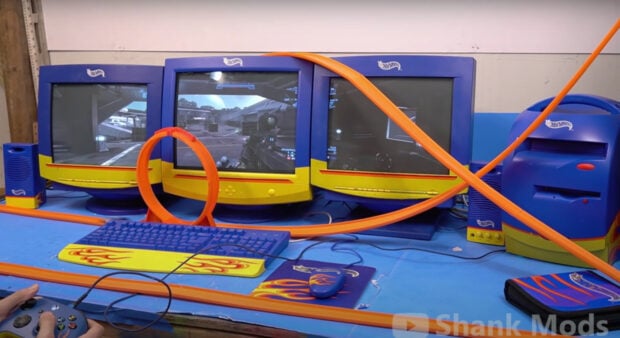 Interestingly, he uses three original Hot Wheels CRT monitors for the display, citing the frame rate benefits of CRTs and the ability to crank all game settings up to max without hindrance. It’s so beautiful I could cry. I could also cry remembering 10-year old me opening a box I thought was a Hot Wheels PC but turned out to be a popcorn maker. Now I can’t even smell popcorn without getting nauseous.