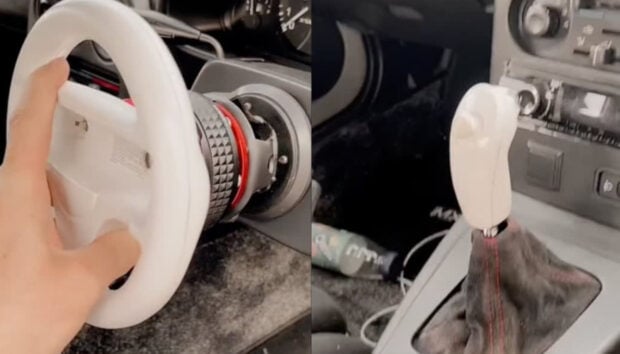 Presumably, to prove that Mario Kart can be used as a realistic driving simulator when coupled with the Nintendo Wii Wheel, TikTok user Tyler Atkin created the ‘Wiiata,’ a Mazda Miata with its steering wheel replaced with the Wii peripheral. He also switched out the car’s gearshift for one of the system’s nunchuck controllers – a nice touch.

Now, if only the Miata just turtle shells its transformation into a real Mario Kart would be complete. Don’t you even think about blasting me with a blue shell. Honestly, there should be an option in the game where you can toggle blue shells on and off, but it appears Nintendo refuses to acknowledge all my angry emails.

Replying to @draxguy had a go at driving. Its not good but it does work🤣 #fyp #foryou #foryoupage #wii #wiiata #mariokart #nintendowii #miat #yata #miata #carsoftiktok

Of course, it’s all fun and games until your steering wheel snaps during a U-turn, and you lose all your steering capabilities. Those plastic steering wheels aren’t exactly the most durable controllers made, you know. I’ve noticed they break especially easy, slamming them into the coffee table after getting beat by your roommate on Rainbow Road for the second time in a row.