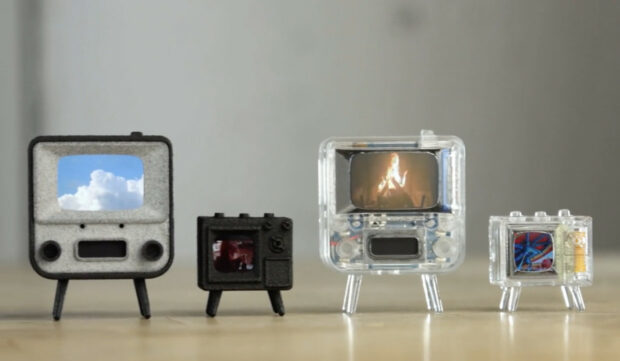 TinyTV 2 and TinyTV Mini are miniature video displays in the form of old CRT televisions. Currently, an already heavily funded Kickstarter project, prices start at $49 and go up from there depending on the style and color of the television case and the inclusion of an equally tiny remote control. Obviously, I might just be receiving that World’s Best Uncle award sooner than I thought if I get one of these for my niece’s dollhouse. 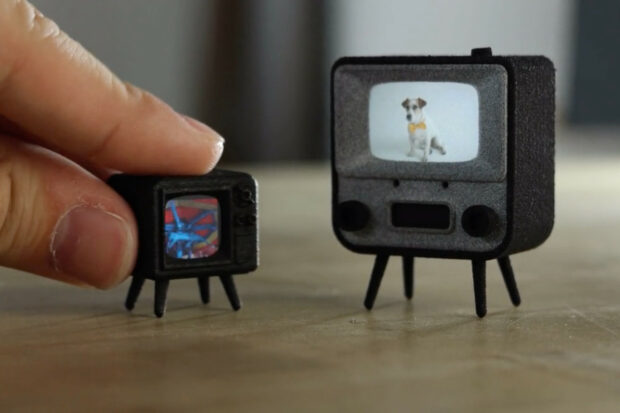 The TinyTV 2 (the larger of the two tiny models) features a 216×135 pixel display, functional rotary knobs on the front for adjusting volume and changing the channel (next video file), a forward-facing speaker, 8GB storage (~10 hours of video) and a Li-polymer battery with about 2 hours of power. The TinyTV Mini features a 64×64 pixel OLED display, volume and channel buttons on top, an internal speaker, 8GB storage (~40 hours of video at this resolution), and a Li-polymer battery with about 1 hour of power. Both can easily have video footage uploaded, and their batteries recharged via USB-C cable, as well as be operated using an IR remote.

Most people want as large a TV as they can fit in front of the sofa, so it’s refreshing to see ultra-miniature televisions for a change. Plus, they’re much more budget-friendly. Sure I’ll likely miss a lot of the finer details watching House of the Dragon, but those dragons would probably scare me on the big screen anyways.