HD DVD Gets Buried by Best Buy and Netflix 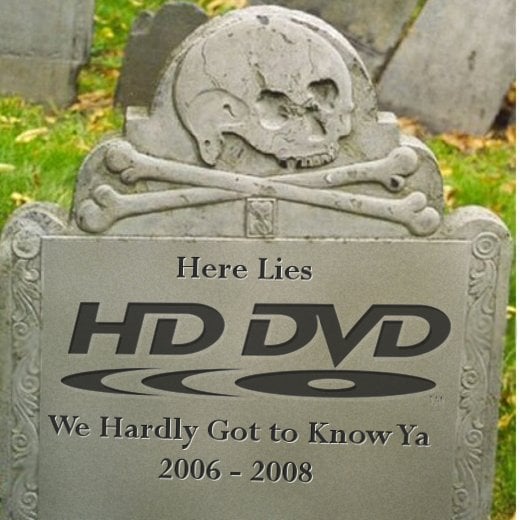 For all of you who’ve been holding out hope that HD DVD might stage a comeback in its stand against the rapidly gaining Blu-ray format, I think that it’s time to count HD DVD down for the count.
Share
Check It Out

HD DVD / Blu-ray Combo Players to be the Norm

According to a recent report from ABI Research, the HD DVD vs. Blu-Ray format war will be won not by either format, but by dual-format players, such as the recently released LG BH100 combo player. According to the Steve Wilson, ABI’s principal consumer electronics analyst: “We believe that universal players will come to dominate the high-definition DVD player market.”
Share
Check It Out

This is starting to sound like the early days of the war in Iraq… Apparently, while we were off living our lives, Blu-ray became the “overwhelming” victor in the high definition format wars. Here are some excerpts from today’s overly self-congratulatory press release from the Blu-ray Disc Association, titled Consumers Overwhelmingly Choose “Blu”: The Blu-ray Disc Association today declared its victory as the premiere high definition DVD format of choice… The success of Blu-ray Disc is unprecedented… consumers have voted with their wallets for the format that offers the widest array of hardware and content on the market.
Share
Check It Out

A while back we reported that Ricoh was working on a optical mechanism that could handle both Blu-ray and HD DVD discs. At next week’s CES show, it’s expected that two companies will be showing off their proposed solutions to dealing with the incompatible formats.
Share
Check It Out