Japanese brewer Suntory has long been making (reportedly disgusting) potions for Square Enix’s Final Fantasy games, but until now they’ve actually resembled the in-game items. The latest round of beverages, however, breaks that tradition — Suntory’s going with the good ol’ fashioned can. Fitting, since the latest limited edition drinks are sodas. 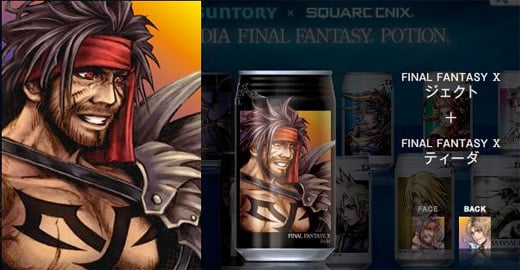 The soda “potions” are a tie-in for the PlayStation Portable’s Dissidia: Final Fantasy, which is schedule for release in Japan this month. There are two different flavors, with two different designs, for Light and Dark characters.

Unfortunately, Final Fantasy XI’s deliciously insulting Doctor Shantotto is the odd tarutaru out, and gets no potion. You can celebrate the rest of the characters, and relive the franchise’s long history with this ad, though.

For relaxing times… oh, you know the rest.