Sure, sure, everyone at CES has shown off their fancy new 3D wares, but the vast majority of 3D tech requires that the viewer wear a pair of glasses, and doesn’t actually let you walk around the object in question and see it from the sides. HoloAD technology from Taiwan’s Innovision does just that. 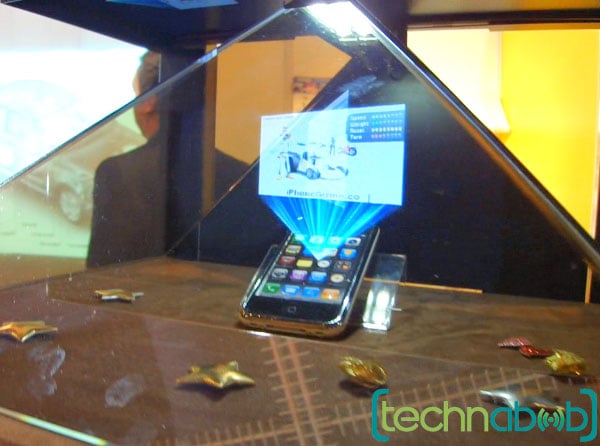 As is the case with all 3D tech, HoloADs work by fooling the brain into thinking it’s seeing something that doesn’t really exist. HoloAD displays work by using a set of three independent images, projected onto the trapezoidal sides of a see-through glass pyramid (the back side is flat), so you can walk 180-degrees around the projection. The result is an image that looks like an animated, full-color hologram. In addition, the display units can hold an actual object under the glass, and can be made to look like that object is the originating source of the 3D projection. Just load up the  properly prepared FLV video footage onto a USB flash disk, and the HoloAD unit does the rest.

While the brief shakycam videos I shot below give you a little sense of how HoloADs work, the effect is nothing short of spectacular when you see it up close and personal.

And here’s an “official” video from Innovision that shows off a couple more 3D objects:

While the demos I saw at CES included such mundane things like an iPhone and a silly looking pufferfish, I really want one of these loaded up a tiny R2-D2 projecting a repeated graphic of Carrie Fisher saying “Help me Obi-Wan Kenobi, you’re my only hope.”