My parents were crazy when I was a kid. They would get a single toy and expect me to share it with my brother. I’m not sure why they thought we were capable of sharing considering all the fights we got into over who had something before the other. I do recall several fights breaking out over the “accidental” erasure of someone’s Etch A Sketch artwork.

What we needed were two Etch A Sketches – or perhaps this sweet Connect A Sketch concept by product design student Andrew Little. Little designed the Connect A Sketch for the 2011 Dundee Degree show and the London exhibition, New Designers. He took a couple of the Etch A Sketch tablets we all know and love, and connected them together somehow so that what is drawn on one screen shows up on the other screen as well. 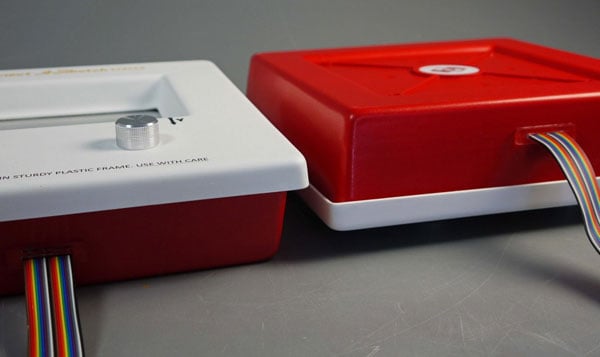 The cool part is if the other guy shakes the screen to clear it, the second user will get a notification to shake their screen to keep up. I would like to know the tech the designer used to make this thing.  What sort of tech do you think is behind the wonder of the Connect A Sketch?