I have talked about Joerg Sprave a few times. He makes some of the wildest looking slingshots that flick things like saw blades and more. I have long thought if I was picking a team of experts to survive a zombie Armageddon, Sprave would be my top pick. One of Joerg’s latest slingshots doesn’t throw anything wicked like saw blades or machetes, it throws iPhones. 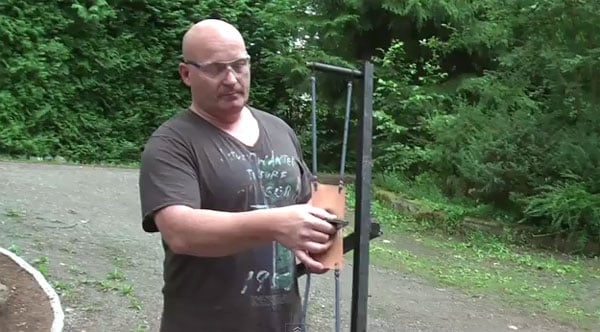 The slingshot has a little leather pouch that he slips the iPhone into after stretching the sling back and latching it to the trigger mechanism. A pull of the trigger then shoots the iPhone out of the pouch and hurls it into the face of the undead. You probably won’t kill a zombie with an iPhone. However, it could be fun if you end up stranded on the roof of a mall that has an AT&T and a Verizon store that is fully stocked.

My favorite part of the video is at the end when Sprave flings the iPhone in the ballistic gel. That looks like it would hurt pretty bad. Sprave also has a bonus at the end where he fires his vampire killing stake slingshot into the gel. That rocket looking stake is definitely up to the task of killing some undead.