I’m one of those guys who thinks motorcycles are really cool, but I don’t ride one. I think it’s because I’ve always been convinced that I’d end up killing myself if I tried to negotiate the slick roads and maniac drivers of Chicago in the winter time. I actually knew a guy in college who rode a motorcycle and got in an accident and ended up as a paraplegic, so that doesn’t help with my anxieties.

But if I were to take up motorcycle riding, this would be protective gear which would convince me to ride. 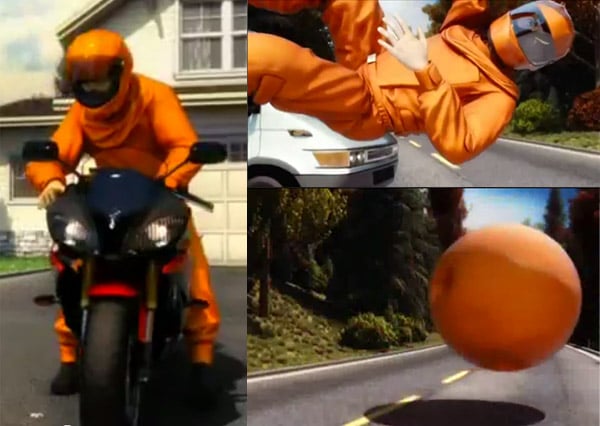 Designed by Rejean Neron, the Safety Sphere is exactly what it sounds like. It’s a special bike suit that automatically inflates into a sphere, enveloping the rider and protecting them from injury if they ever go flying off the bike in a crash. The suit inflates to its full capacity in 5/100ths of a second, and fills with compressed air to cushion the impact. The sphere is made up of two layers of fabric, including an inner layer of thin elastic material, and an outer layer of parachute-type cloth. A battery connects to an electric ignition which triggers nitrocellulose canister, inflating the suit in the event of an impact.

Yes, the resulting expanded suit looks completely ridiculous. I’m reminded of that part of Willy Wonka where Violet Beuregarde turns into a blueberry, except this time you’ll be turning into a navel orange. Still, I’d rather look stupid than end up dead. From the looks of things, you might still need some Oompa Loompas to come rescue you after an accident, too.