We’ve featured some unusual casemods around here over the years, but the well seemed to have been drying up until recently. With computers becoming more compact, and more all-in-one devices, there’s not as much of a customization scene anymore. So when I stumble across an interesting mod these days, I have to jump on it – even one that was actually made all the way back in 2004. 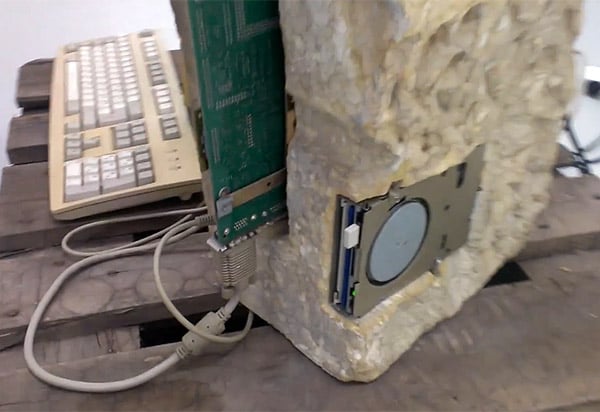 This particular mod may not have the latest and greatest in PC tech on board, but that’s not the point. In fact, I figure that this computer carved from a chunk of sandstone deserves some stone age tech to go along with it. It was built by artist Aram Bartholl out of a chunk of sandstone, measuring approximately 19″ x 23″ x 16″, and sports an achingly old-school 386DX40 PC motherboard. At least it’s easy to upgrade the memory with it sticking out of the front like that.

Rounding out the archaic design is a black-and-white GoldStar computer monitor (did you know that LG used to be GoldStar?), a 3.5″ floppy drive and a clunky old PS/2 keyboard. If you watch the video footage above, you’ll even get to see it playing the PC classic, Prince of Persia.