Having a Ball with the Sphero Robot

I first saw the Sphero robotic ball about 2 years ago at CES, but I never really got a chance to play with one hands-on until now. When I first saw it in action, all I wanted to say was “Do not taunt Happy Fun Ball.” This little orb is packed with cool technology that lets you use it as a remote-control vehicle, a game controller, and tech toy/plaything. 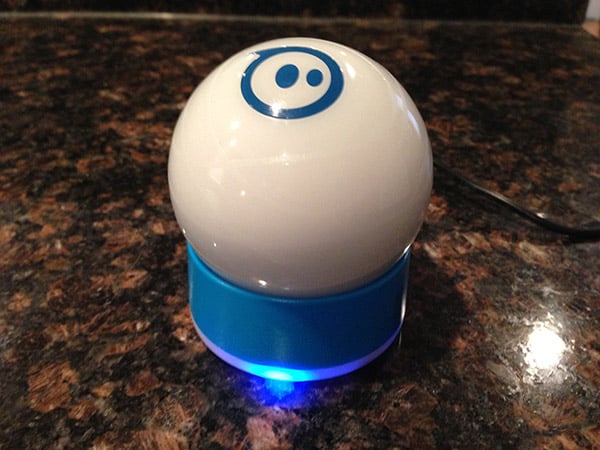 Made by Orbotix, the Sphero itself is a durable polycarbonate-shelled orb which fits nicely in the palm of your hand. This is no accident, since this makes it work perfectly as a controller or plaything itself when it’s not rolling around on the floor. Inside of the ball are its brains, wireless circuit, motion sensors, motors, a small rechargeable battery and multicolor LEDs. 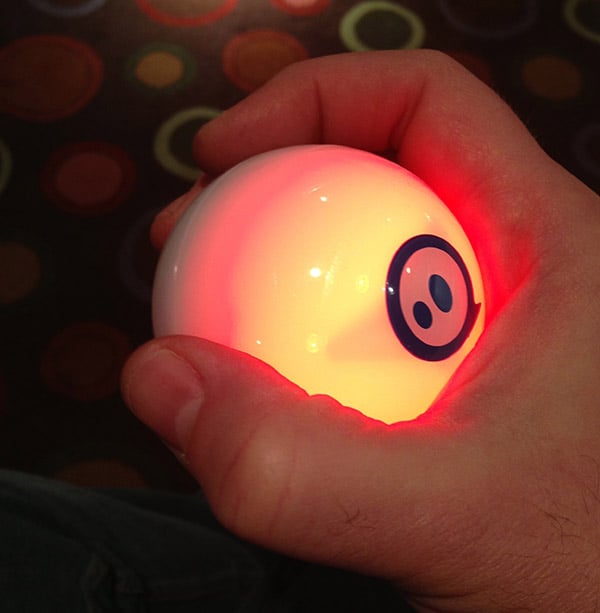 The spherical robot is capable of traversing a variety of surfaces, including hardwood floors, tile, grass, concrete and low-pile carpet (it has a hard time on thicker carpets). It’s even waterproof, so you can drive it around in the bathtub or in a puddle. To juice up the Sphero, simply set it in its inductive charging cradle, and it’ll go for up to an hour on a single charge.

You control the Sphero using either iOS or Android apps, which range from the main Sphero R/C controller app to games, interactive toys, augmented reality and macro programming apps. The library of Sphero apps continues to grow too, since there’s a full Sphero API and SDK available for developers to make their own applications. Many of the current apps are free, while the few that cost money sell for $1.99 or less. 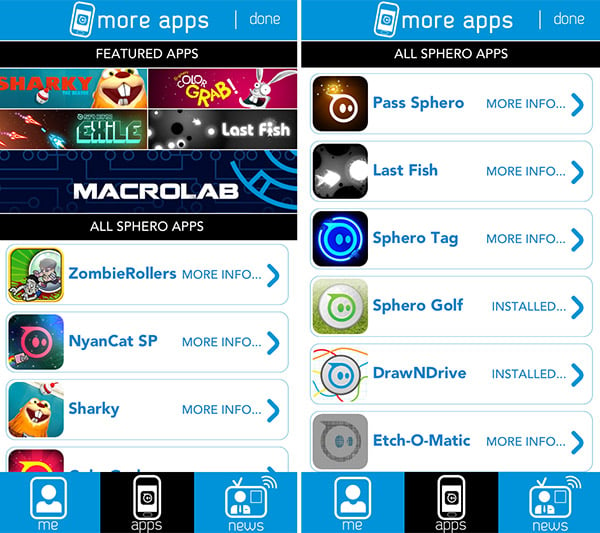 Playing with Sphero is a blast, and it’s stupid-simple to use. Simply pair it with your Bluetooth device, load up an app of your choice, orient the Sphero properly and start playing. It’ll operate at distances up to about 50 feet from your device. Setting the Sphero’s orientation is simple. Just place the ball on the ground and use two fingers to maneuver its secondary blue “tail” LED to point towards you. If you should pick up and move the Sphero, you can do this again in a jiffy.

The main Sphero app is a great place to start, as it lets you drive the Sphero and play with its colors with ease. You can choose from a touch-based or motion-based control scheme, as well as several pre-set macros for things like circles, Figure 8’s and a flashing light show. 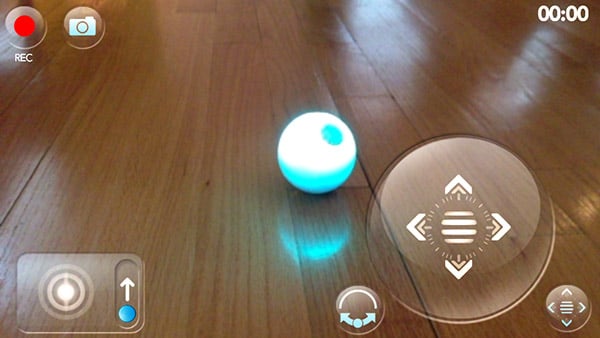 The Sphero app can also capture stills or video of your escapades and save them to your device.

And if you log into the Sphero ecosystem, you can record fun achievements, track stats and compete with others for Sphero supremacy. 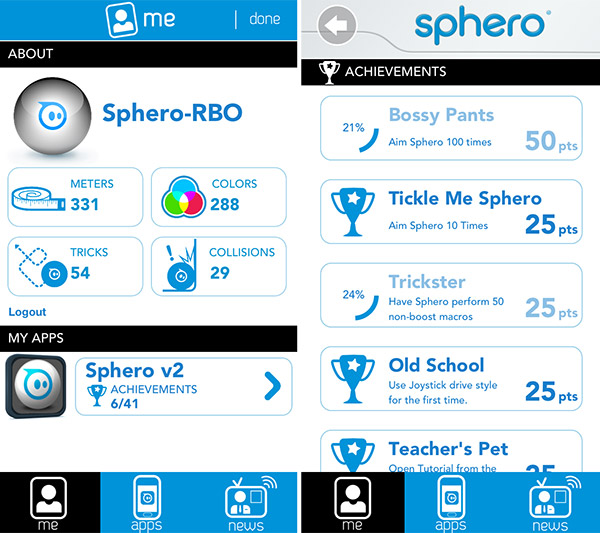 I tried out just about every Sphero app I could find on the iTunes App Store, and here are my personal favorites: 1) ColorGrab – a frustrating, but fun multiplayer game in which players must quickly pick up the Sphero when its flashing in a specified color; 2) Draw & Drive – which lets you simply draw a path for your Sphero to follow; 3) Etch-o-Matic – this turns your Sphero into the controller for an Etch-a-Sketch inspired drawing pad; and 4) Sharky – an augmented reality app which turns your Sphero into a funny looking beaver that you flick virtual cupcakes at. It’s completely silly, but a fun tech demo. 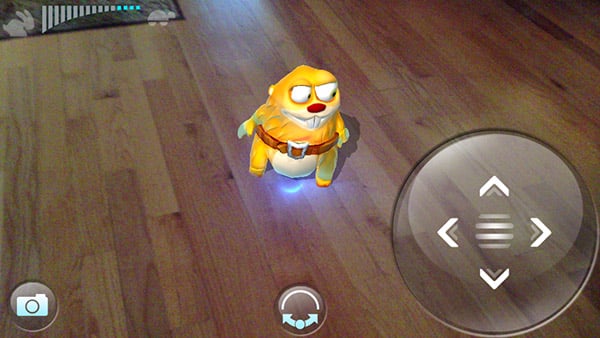 The hacker in me got the most joy out of the MacroLab app, which lets you create complex programming sequences for the Sphero, adjusting all of its available parameters. These include movement, rotation, light color, speed, and basic programming constructs like delays and loops. The only thing I wish is that you could take your saved macros and load them into the main Sphero application for playback. Apparently, the Android version can even control multiple Spheros at the same time. 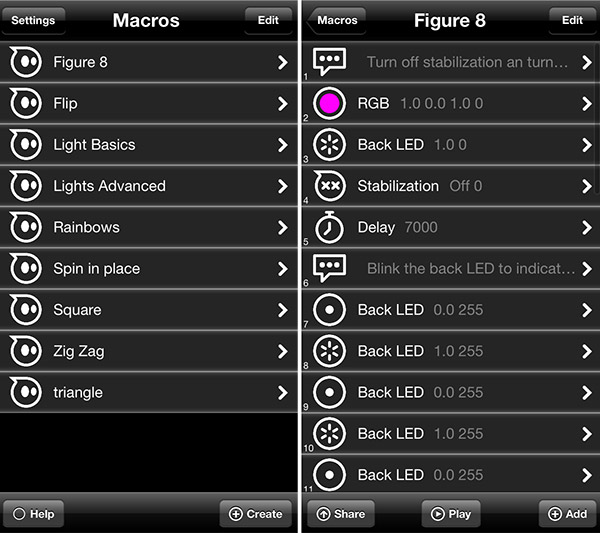 If you and your friends have more than one Sphero, they can be independently controlled for races, running obstacle courses, or even for playing Sphero miniature golf (which can also be played solo). 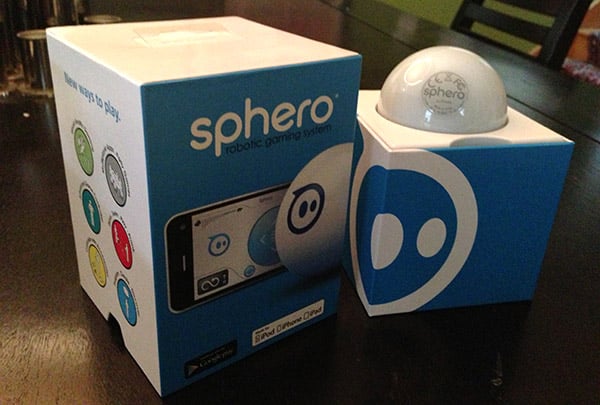 All in all, I really have had a good time playing with the Sphero, and I can only imagine that kids and geeks of all ages would get a kick out of having one. It’s also great for tormenting your pets. The fact that it’s programmable and has a software development community means that even if you get bored with it for a little while, there will be more apps coming down the pike to give it new life. And if you’re a real tinkerer, you can even make your own apps.

Sphero sells for $129.99(USD) over on the Sphero website, and is also available from a number of retailers both online and offline.

Disclosure: Orbotix provided the Sphero for review in this article. However, all reviews are the unbiased views of our editorial staff, and we will only recommend products or services we have used personally, and believe will be good for our readers.