Like most electronic devices, drones and multicopters are plagued by poor battery life. Intelligent Energy hopes to change that within the next few years with its hydrogen fuel cells, which can power a drone for up to 2 hours and can be refilled within minutes. 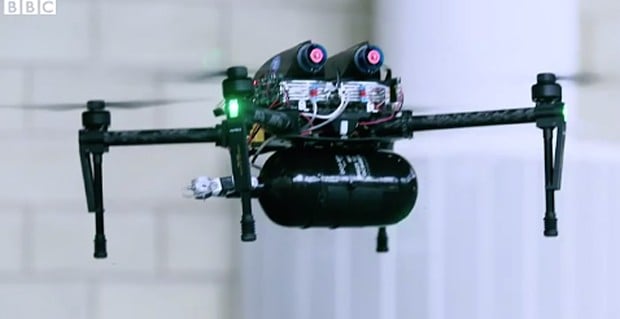 Intelligent Energy recently showed BBC Click a DJI Matrice 100 modified to run on two of the company’s prototype fuel cells. The fuel cells and its tank weighed about 3.5lb., so it may be relegated to larger drones.

In case you didn’t watch the video, Intelligent Energy said it hopes to have its fuel cells on commercial drones within the next year. Aside from drones, Intelligent Energy is also working with a smartphone manufacturer to create a phone that lasts up to a week on its hydrogen fuel cells. The Telegraph also reported that the English company has licensed its technology to unnamed vehicle manufacturers, but it could take years before any fruits of that partnership are shown to the public.