The crazy inventor Colin Furze promoted Intel’s new TV series America’s Greatest Makers by making a flamethrowing guitar and a bass that’s literally smoking. He may be a Brit, but he’s a great maker all right. 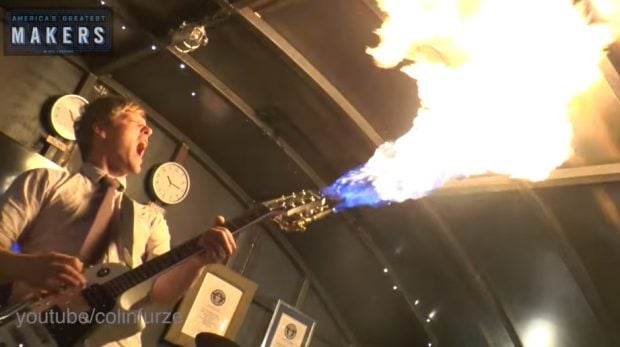 Colin actually made not one, not two, but four mods for this promotion. For the flamethrowing guitar, Colin attached three blowtorch heads to the head of a guitar. He then installed several pipes, a gas reservoir, an igniter and a solenoid valve on the guitar’s body. He can trigger the flames manually, but he also used an Arduino 101 and a program where he can set flame patterns for automated operation.

In keeping with his theme, Colin mounted the Arduino 101 as well as a gas tank inside a guitar amplifier, so that the sound, the electronics and the gas are all coming from one box.

The smoking bass is simpler but no less cool. Colin routed smoke from a smoke machine to holes that he drilled on the guitar’s body, as well as to pipes along the instrument’s neck and head. He added a computer fan to the mouth of the smoke machine to push the smoke along and prevent the hot vapor from melting the plastic pipe that connects to the bass. He also mounted the smoke machine and a bass amp into a single base, and attached strobe lights to the guitar to take it to 11.