Fett2-D2 (or is it R2-Fett2?) is the perfect droid/bounty hunter mashup. He can hold Death Star plans, serve drinks, or hunt down smugglers for bounties. He already had jets. Now he has another. This droid would be the ultimate bad guy.
This awesome Mandalorian astromech was spotted by cosplayer Victoria Schmidt at MegaCon 2016. 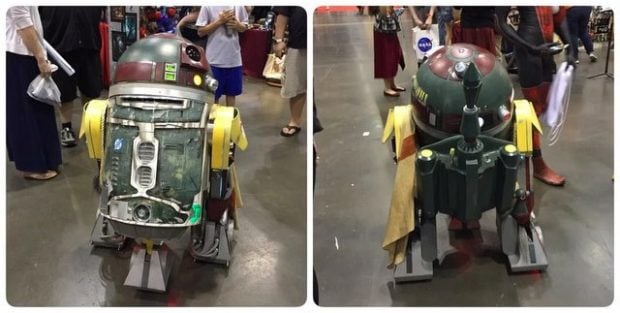 It’s awesome, but it makes me sad, because I really wish I could get a toy based on this droid. They really did a great job getting all of the details just right. Maybe this guy could be Boba Fett’s sidekick in the Boba Fett movie they have planned. I wouldn’t mind that at all.