Looking for a cool way to change up your empty walls? Instead of putting up a painting or a poster, why not do something a little different? The Sony LSPX-P1 projector is a great way to take advantage of an open stretch of wall, and can throw images from just a few inches away onto any flat surface. 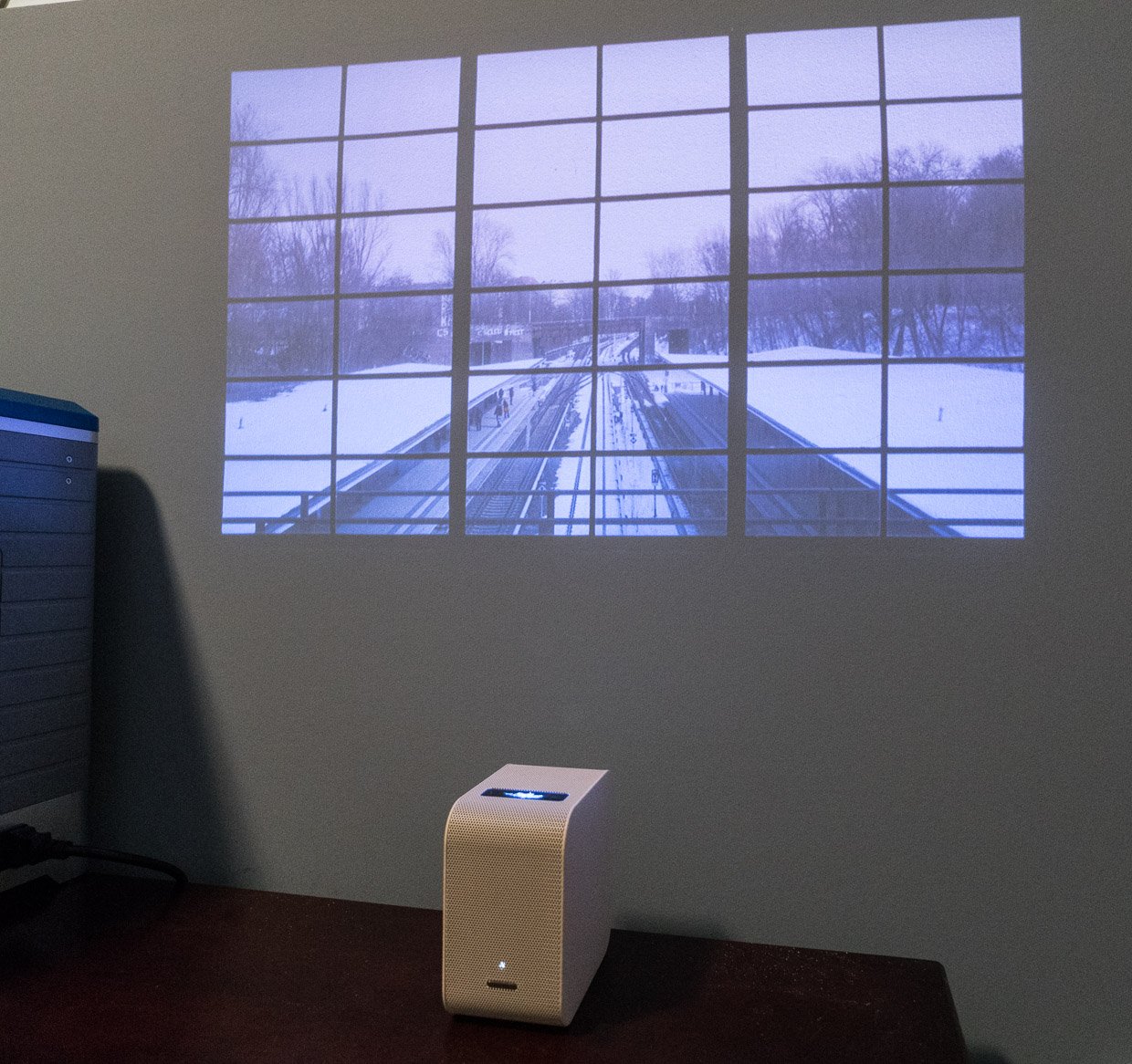 While there are projectors on the market designed for watching movies on a big screen, those must typically be placed on the other side of the room, and usually need you to run cables from your video source. Not so with the LSPX-P1. This nifty little box can operate right up against your wall, and can project an image from 22″ up to 80″ diagonal, depending on how far back you pull it from the wall. 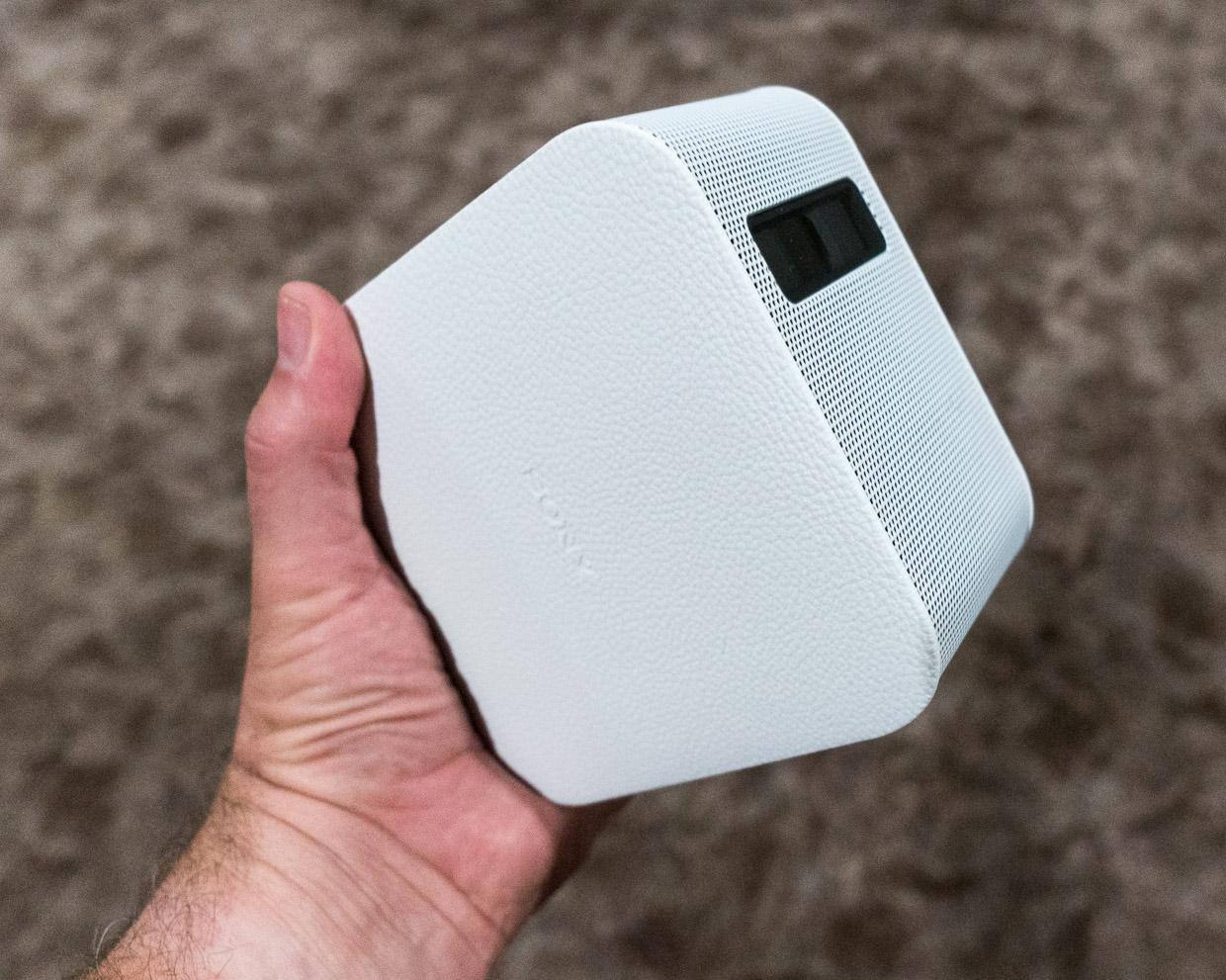 Measuring in at just 3-1/4″ x 5-1/4″ x 5-1/4″ the compact projector is small enough to carry around in a backpack, and has a built in rechargeable battery, which lets it run for up to 2 hours on a charge. Of course, you can plug it into the wall if you want to run it without time constraints. In terms of signal sources, you can feed it with video or photos on your iOS or Android smartphone, or send content from any HDMI source using the included wireless HDMI adapter box (shown below on the left): 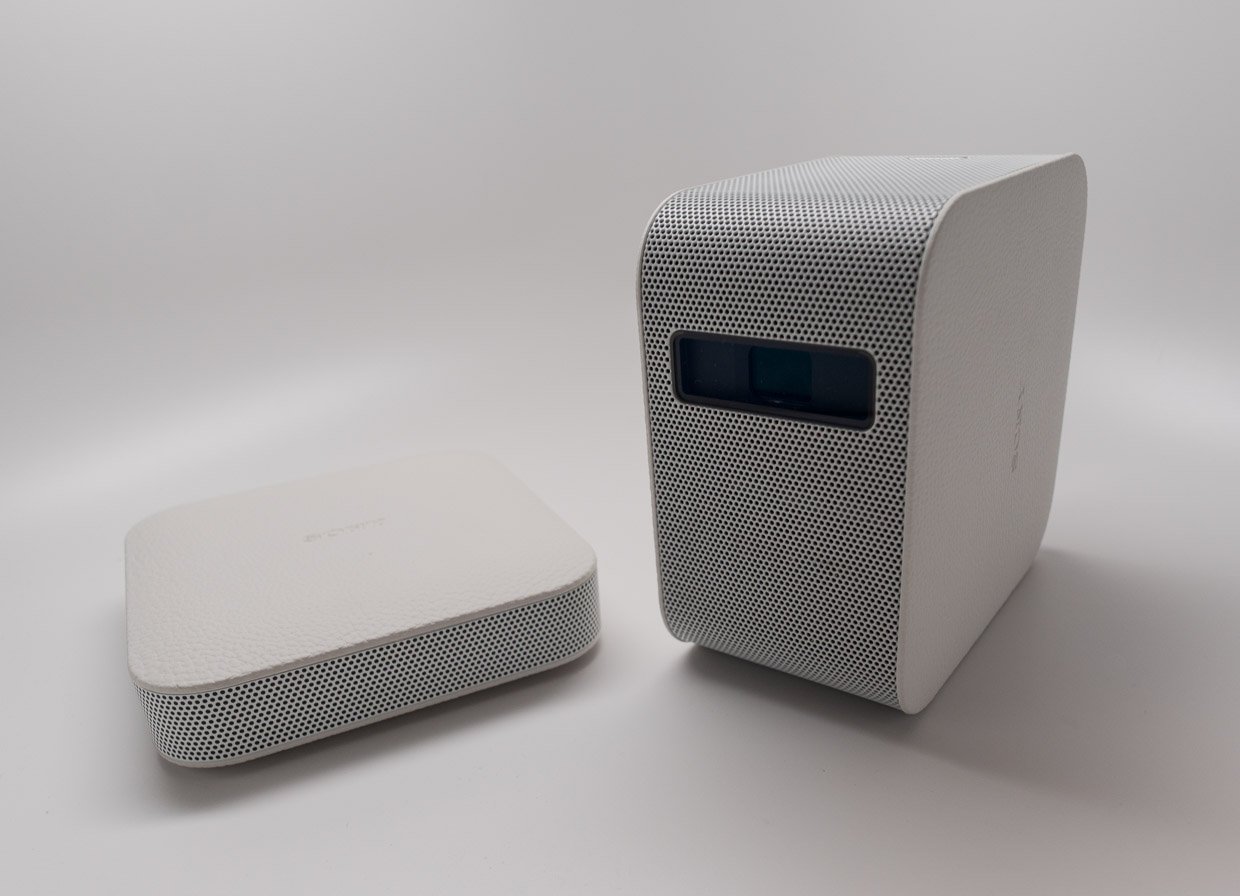 Keep in mind, this little projector isn’t for home theater buffs or video snobs. It’s designed first and foremost for projecting ambient imagery and setting a mood. With that in mind, the companion smartphone app comes pre-loaded with several sets of “posters,” which include slideshows of nature scenery, windows, and a cool weather mode which shows a scene that corresponds to the current weather. You can create and project slideshows of your own images as well. 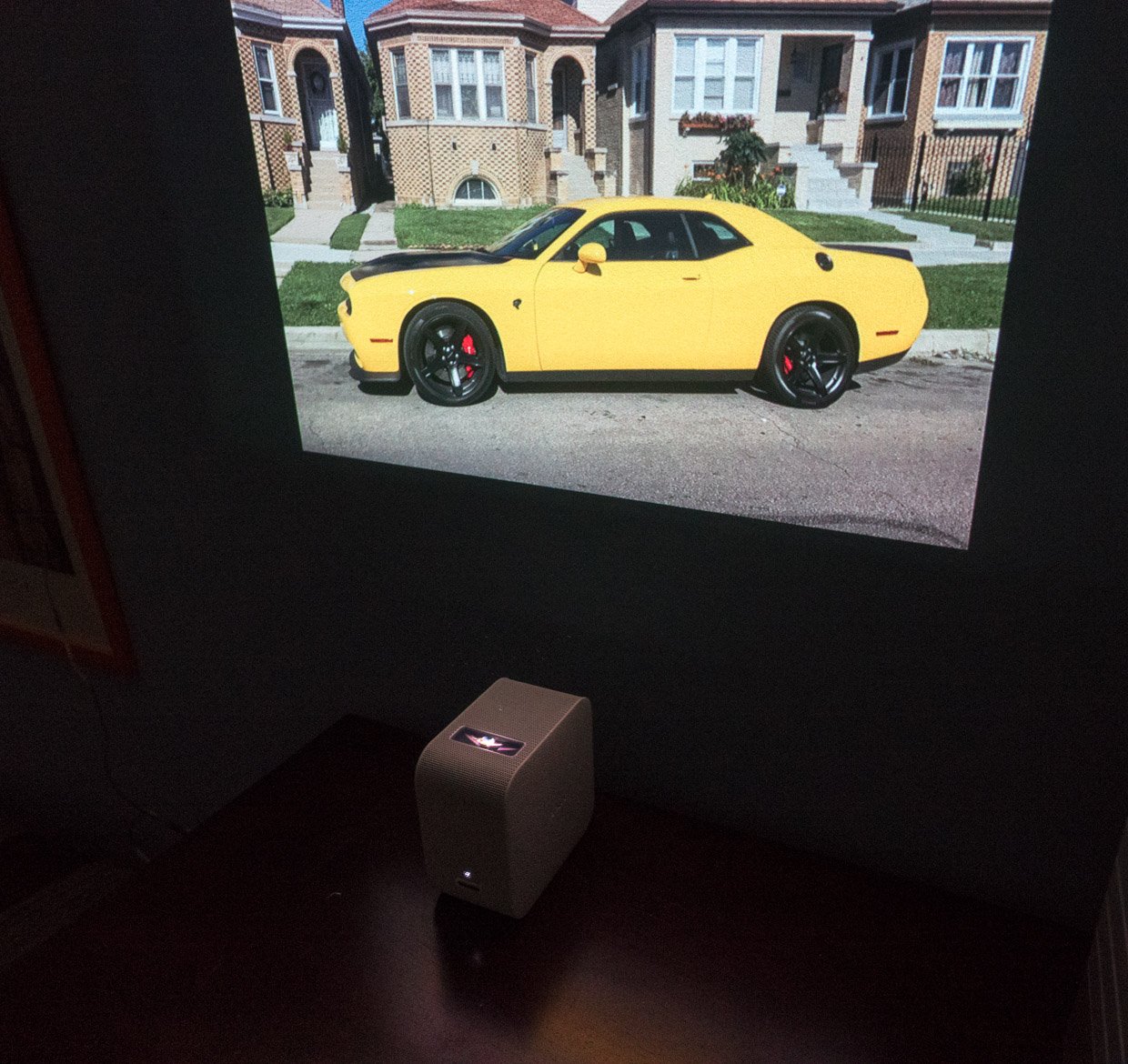 The projector uses a 1366×768 SXRD chip, along with a bright laser diode, and some impressive optics to work its magic. Overall, image quality is punchy, colorful, and offers very good contrast for a projector. While you’ll get the most authentic color reproduction and brightness on a white wall or screen, it performs surprisingly well on color painted walls too. Since there’s not a single white wall in my house, every wall image sample you see here was shot against colored paint. I tested it using a folding projector screen too, but the short throw makes it quite susceptible to wavy distortion on soft screens. That said, a totally flat surface is your best bet.

One of my favorite uses for the LSPX-P1 is its ability to work as a clock. You can choose from several analog and digital clock styles in the smartphone app, and project the time onto any wall. Of course, if all you’re going to do is use this as a clock, the $999.99 pricetag is more than a bit extravagant. 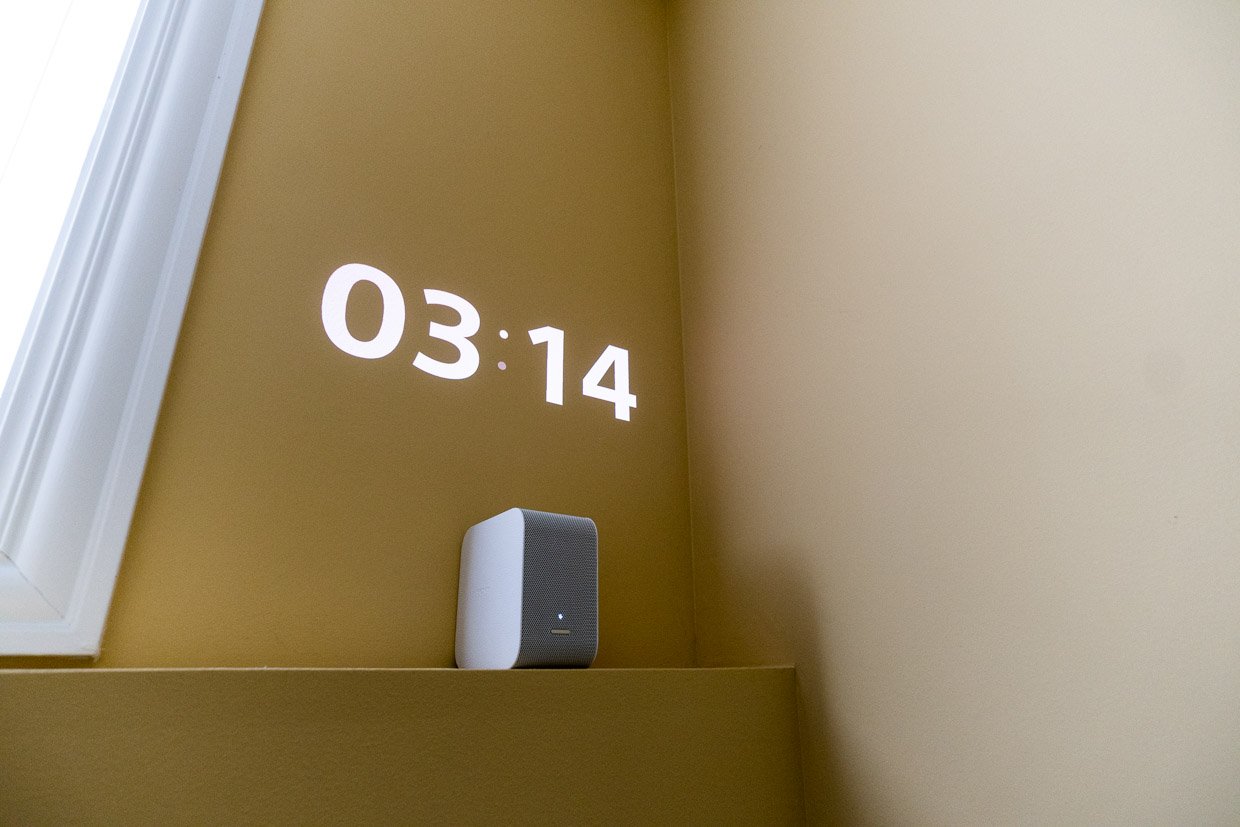 While most of us watch movies on flat LCD or OLED TV screen these days, it’s neat to be able to watch video wherever you want too. Since there’s a pair of built in speakers and an amp, you don’t need any extra gear to listen to your content either. The speakers are by no means loud, but they’re on-par with what you might get from a good laptop. For more volume, the wireless HDMI dock has an HDMI out port which you can connect to your soundbar or other audio system. 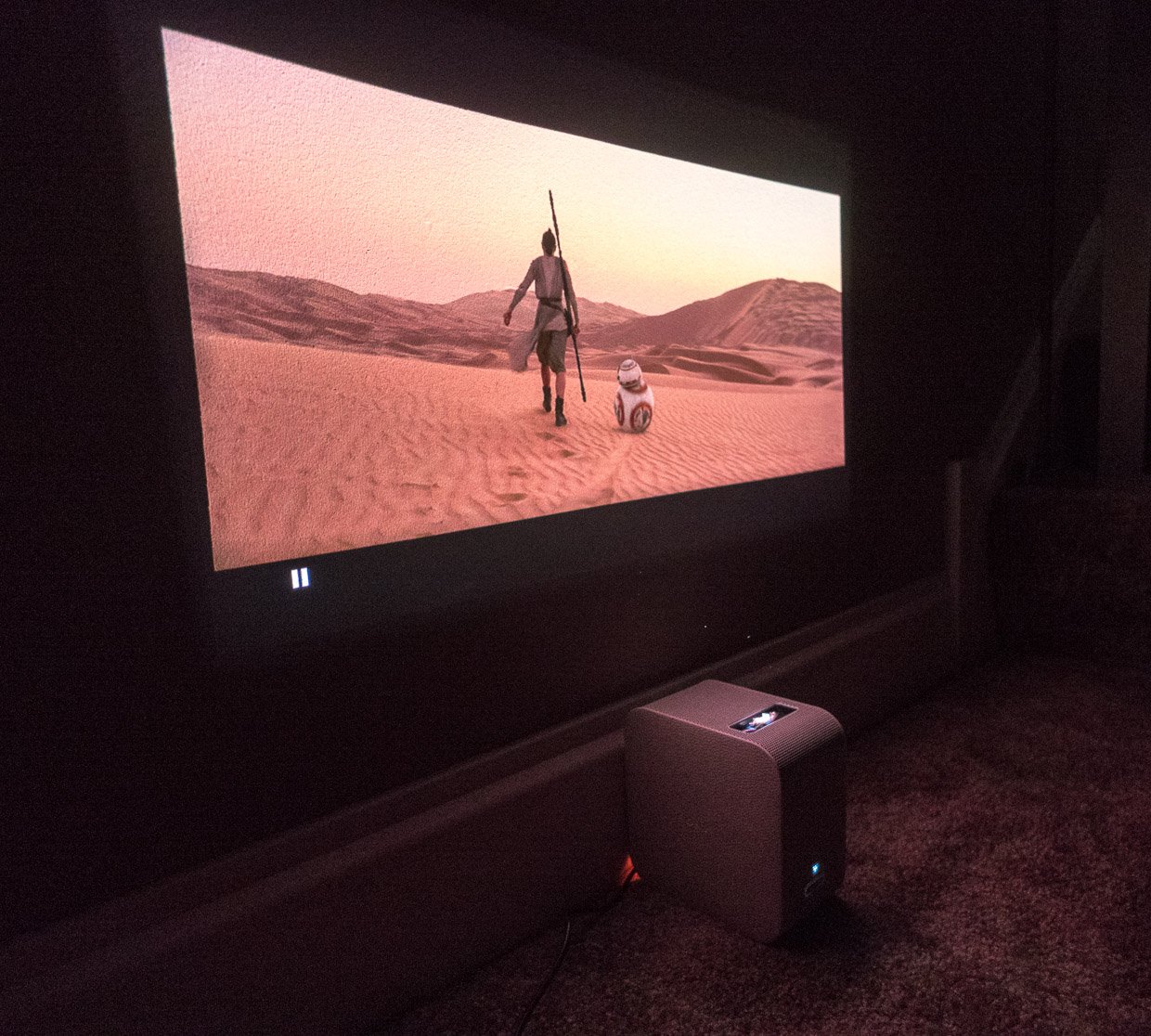 Thanks to its super short-throw optics, you can use the LSPX-P1 to project images on a tabletop or on the floor too. This is a fun way to play video games, or if you lay down some poster board, you can let the kids doodle right on their movie screen. In my case, I played some arcade games on the side of a cardboard box. Neat! 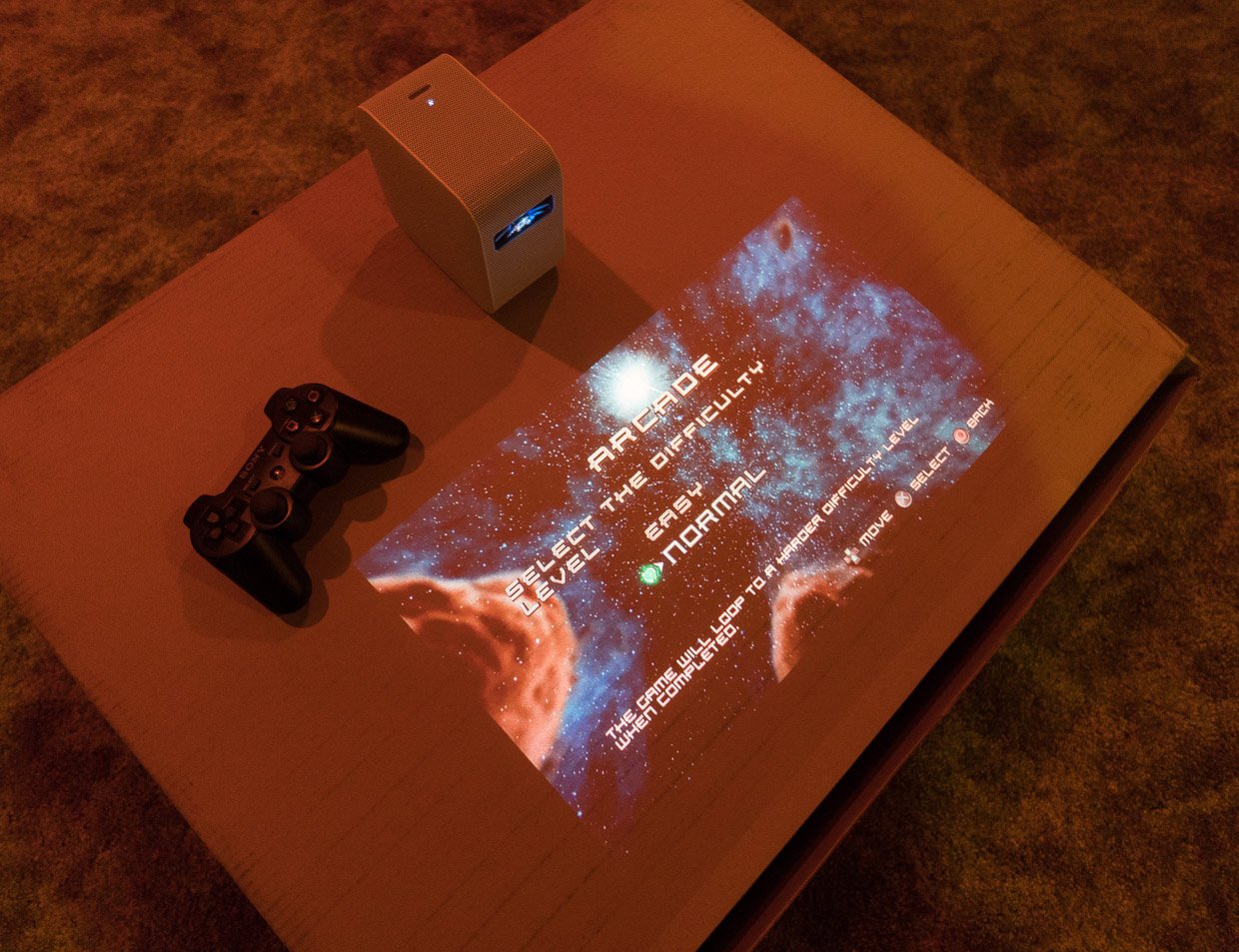 Being able to project images from such a close distance, and with such a small device really does let you be creative, and that’s where the Sony LSPX-P1 projector really shines. It’s great for projecting images on a wall, a table, or any other surface you’d like. You can buy one now from the Sony website for $999.99(USD). 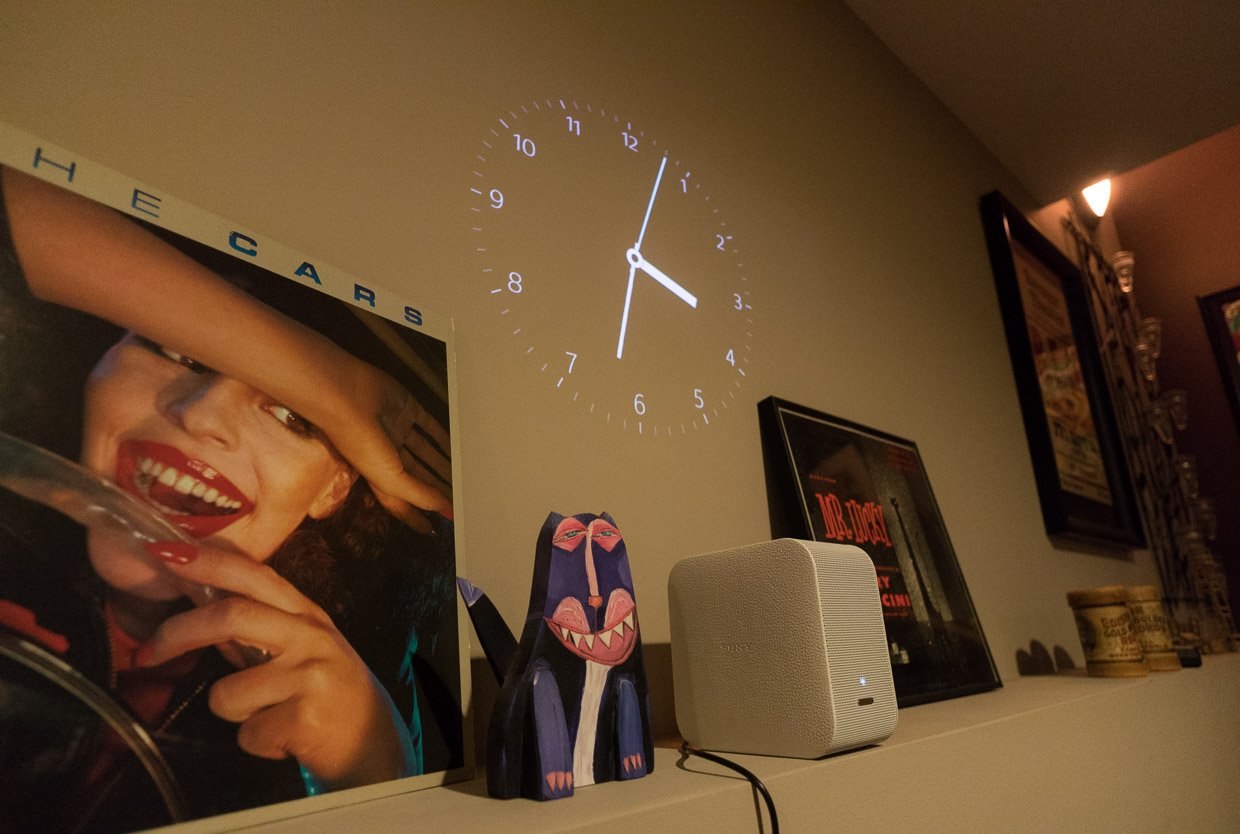 [FTC Disclaimer: Technabob was provided with the hardware tested in this review by Sony at no cost. However, all reviews on Technabob are the unbiased opinions of our authors, and in no way represent the views of the product manufacturers represented here.]