When you think of desktop speakers, they’re usually big boxy things with a couple of round drivers or maybe a horn tweeter. But the guys at VETR have designed something very different – flat speakers which use sheets of carbon fiber to help disperse their audio. I was pretty cynical about the idea when I first saw them, and figured it was just a design gimmick. But I was wrong. VETR’s PANL1 carbon fiber speakers actually sound very good. 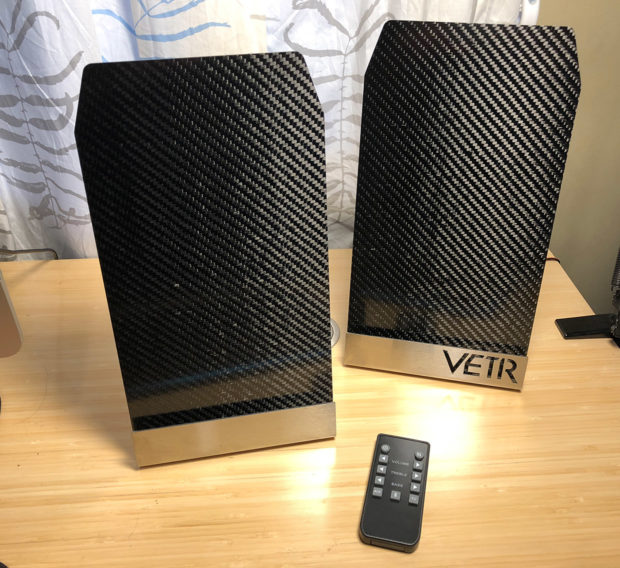 In fact, their flat panel design allows them to create one of the widest, most open soundstages I’ve heard from a pair of desktop speakers.

The first thing you’ll notice about the PANL1 speakers is just how thin they are. Each 11″ tall speaker consists of a bent stainless steel stand with set of very flat drivers inside, both attached to a 1.3mm thick panel of real carbon fiber. The look is pretty darned slick, though I do have to say the large “VETR” logo cut out of one of the speakers is a little distracting. Given the fact that they’re designed to be minimal, a giant logo kind of defeats that idea a bit. But at the end of the day, the question is how good a pair of speakers sounds, and not how they look. In addition to the stainless and black carbon fiber design shown here, VETR plans to make the speakers with several other colors of carbon fiber, as well as with black stands.

Connecting the PANL1 speakers is simple – just connect the power brick and speaker cables into the included compact subwoofer/amplifier and the right and left speaker panels, plug the 3.5mm to RCA cable to your analog audio source, and/or push the Bluetooth button on the remote to set up your wireless device. 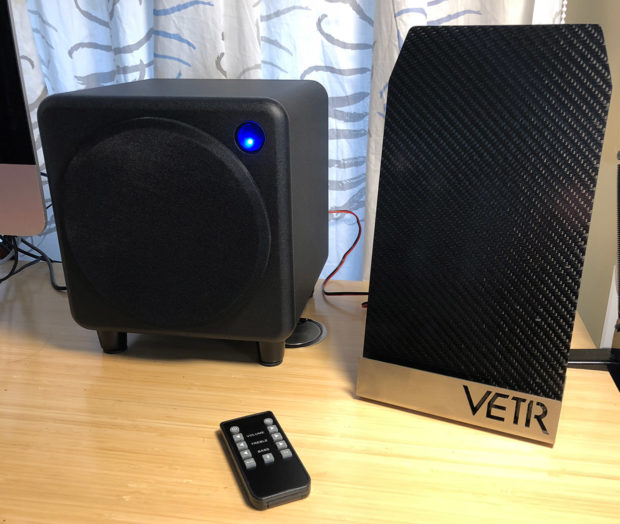 Straight out of the box, I found high frequencies to be a little lacking, and the lows from the sub to be a bit overdriven, but fiddling with the reduce bass button (as recommended on the instruction sheet), and then increasing the treble setting solved that problem quickly, and I was quickly treated to some extremely bright and dynamic sound.  I’d love to see the amplifier’s equalization come pre-tuned for the speakers from the factory, especially since it seems to lose its settings if they lose power. Once everything was configured properly, high frequencies were cleanly detectable all the way up to 19.5 kHz or so, while the low end kicked in right around 20 Hz in my testing.

Are their dynamics good as traditional drivers? Well not quite, but they’re way better than I expected from a product I thought would be all about aesthetics. 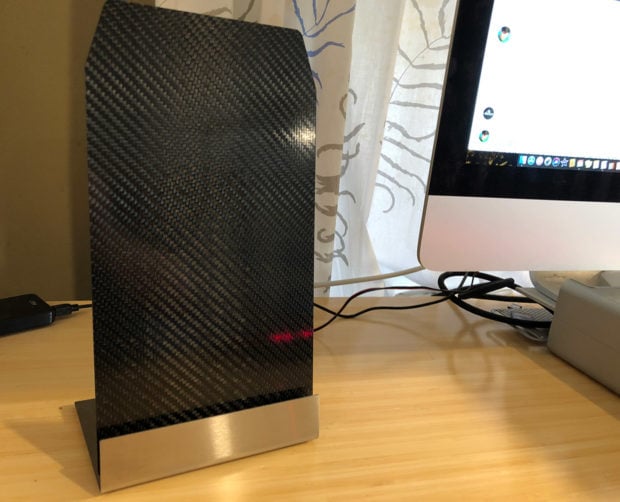 What’s most impressive about the PANL1 speakers is their soundstage – which is expansive and open – creating an image that far exceeds the width or height of the speakers themselves. While the imaging isn’t as precise as big floor-standing loudspeakers, it’s much better than most desktop or bookshelf units. I’m guessing that has something to do with the fact that each PANL1 speaker has over 130 square inches of surface area –  nearly 10 times more than than typical desktop speakers.

They can also push out an impressive amount of volume, in part thanks to the compact subwoofer which takes on the low-end duties with aplomb, and 48 watts of amplification per channel. There’s plenty of deep, thumpy bass to be had from this 7″ sub , which appears to be some kind of off-the-shelf OEM unit that VETR is pairing with their proprietary carbon fiber satellites. Speaking of volume, the PANL1 speakers seem to perform the best when driven at 70% or more of their maximum volume. At lower volume levels, they do lose some of their dynamic range, and things get to be a bit vague in terms of imaging. On the other hand, at loud volumes, they sound fantastic. 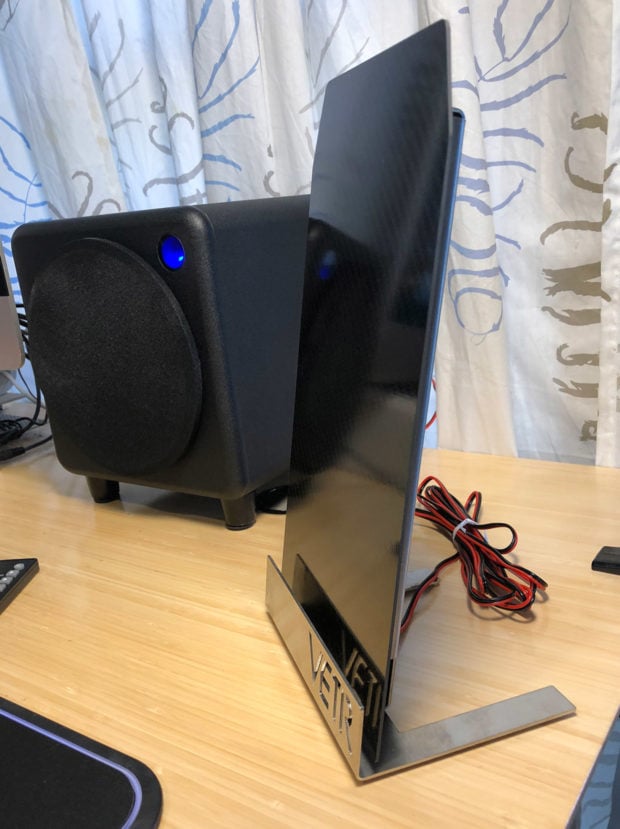 I’m quite impressed with the overall sound quality from the VETR PANL1 speakers. They offer very good dynamics and minimal distortion when played loud, and they look cool doing it. Keep in mind that the speakers reviewed here are prototypes, and there may be further refinements made to the final production version, which are expected to ship by June 2018. A few wishes I have for the production version include shrinking the VETR logo, and pre-tuning the amplifier to the optimal equalization from the factory. I’d also love it if the IR remote could be pointed at the satellites rather than the subwoofer, since that’s likely to be placed on the floor, and not necessarily in the line of sight of the remote. 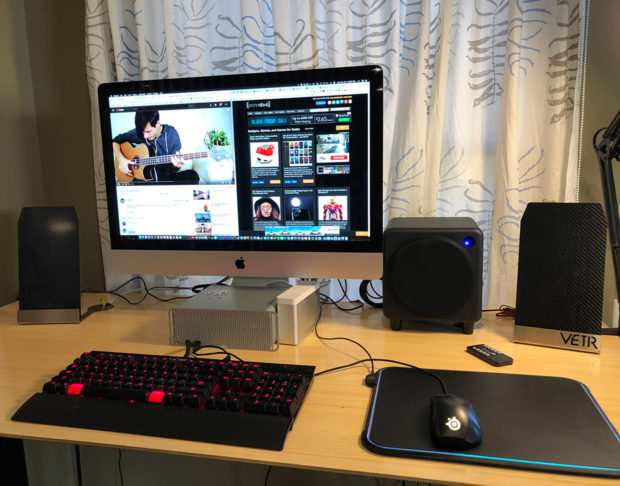 Currently the PANL1 speakers are being crowdfunded over on Indiegogo, where a $249 pledge will get you the Super Early Bird pricing for the system. The next batch will go for $299, followed by $349 once those sell out.