Do your kids sit around on the couch all day playing video games? That’s no way to stay in shape. Jeremy Fielding came up with a solution to the problem, by modding an old rowing machine so it must be constantly used in order for his kids’ Wii to be played. After one minute of non-use, the batteries inside will die and kill the console. So it’s a race against time. 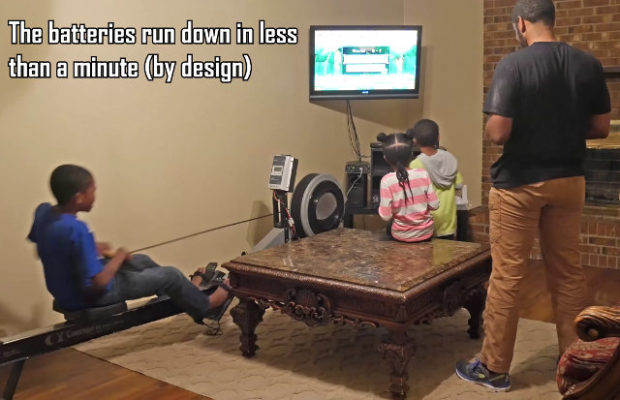 No rowing means no video games, kids. So you better get started working out. These kids are gonna work up a sweat playing Mario Kart, and that’s gonna make them healthier. Check it out in action at 7:38 in the video below:

It’s great until the kids get smart and learn how to mod that rowing machine to row itself so that it only “looks” like the kids are operating it. I guess you could also mod your game room door to keep dad the hell away so you can get some quality game time in for God’s sake. I recommend a simple deadbolt. Or prank call him and pretend you’re his boss, sending him back to the office.