Han Solo’s iconic sidearm, the DL-44 Heavy Blaster Pistol is a solid sci-fi gun. The design is rugged and cool, plus it shoots lasers. What more do you need? These qualities make it an instant classic. But if you prefer rubber bands to lasers, Slingshot Channel’s Joerg Sprave has made that a reality. 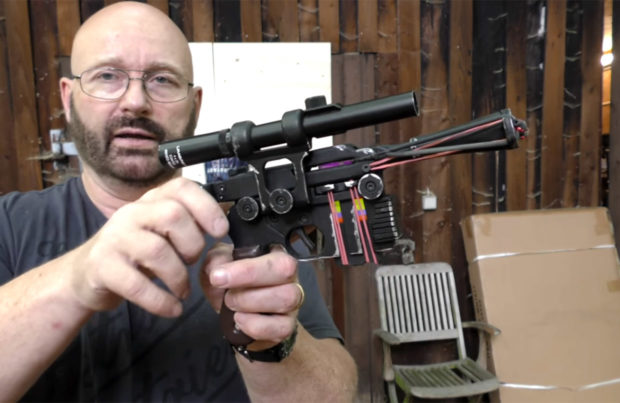 This wooden replica gets the details just right. The other thing that makes this blaster replica stand out is that it looks like it is shooting lasers. This was accomplished by using miniature glowsticks as projectiles. That’s a pretty genius idea. Leave it to Joerg to come up with this.

I would pew pew pew all day long with this gun. Of course, range and accuracy leave a lot to be desired here, but that is to be expected. This blaster just looks so cool and he did a great job giving it that weathered and worn-in look. See it in action in the video and you will want one for yourself.