Some dads don’t instill the best values into their kids, and this is one of them. Police are looking for a man who got his toddler to crawl up inside of a BarBerCut Lite game machine at a Salem, New Hampshire mall in order to grab some expensive prizes, including a Nintendo Switch and a Nintendo 3DS. 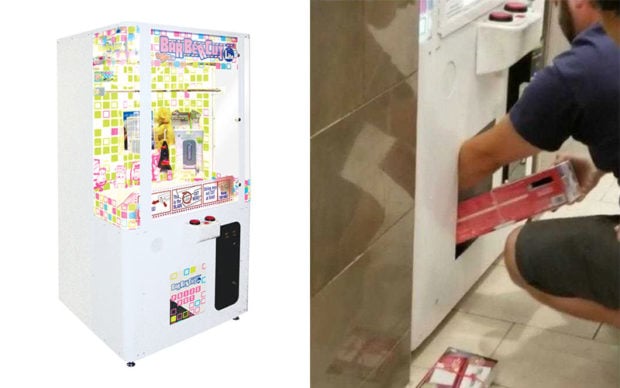 Security at the mall was alerted to what was going on by a hostess at a restaurant, who later told The Union Leader “two people came in and I heard them say, ‘That’s so unsafe.’ So I went outside and all I saw was the toddler’s head peeping out of the front of the machine.” She says the man made off with “multiple prizes.” That’s it? You just saw that and then you were like “oh well, back to my work…”? I guess that’s what happened because that’s the quote we have from this lady. Just a toddler in a prize machine. No big deal.

The video below shows the incident, which includes the blurred out toddler’s head popping out of the machine towards the end. Not only is the stealing a crime, but who knows how dangerous it was for the kid to be inside of that machine?

Theft from Mall at Rockingham Park

Attached is a video from the incident Saturday night at the Mall at Rockingham Park. The video has intentionally been blurred out to protect the identity of the involved children. Anyone who recognizes the suspect in this case is urged to call Detective Dempsey at 603-890-2343 or message us here on Facebook.Thank you!

Anyway, police are looking for this guy now, so those consoles that he stole may end up being very expensive rather than free. Crime doesn’t pay, kids. Even if your dad says it’s okay.