Only a handful of men have ever walked on the Moon, and a very limited amount of soil and rock samples have ever returned to Earth. The rarity of these samples means that the vast majority of them are owned by the US and Russian governments –  as the two nations that put men on the moon. On one visit to the Moon in 1970, Russian astronauts collected samples, and brought them home. 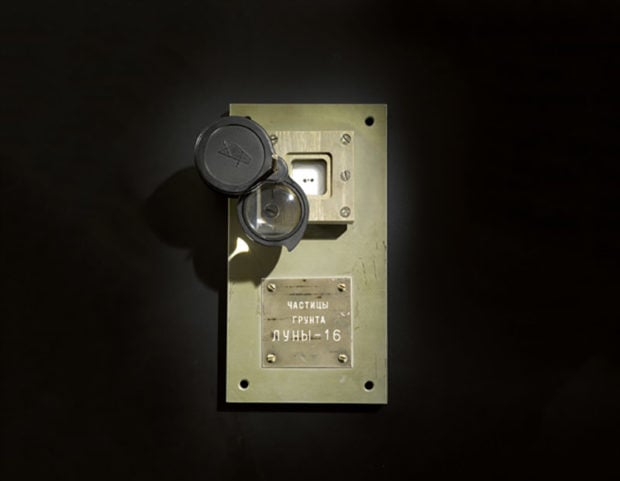 On return, some small soil samples were gifted to a woman called Nina Ivanovna Koroleva, widow of Sergei Pavlovich Korolev, who was previously head of the Soviet space program. Now, the samples are up for auction.

The tiny samples are encased under glass with an adjustable lens that can be used for viewing on what appears to be a metal plate with Russian writing on the front. The writing translates to “Soil Particles from Luna-16.” The particles have been identified by scientists as a basaltic central fragment with feldspar crystals, surficial debris called regolith, and glass coatings caused by micro-meteorite impact. Tests show that they contain more than 70 elements and are dated approximately 3.4 billion years old.

As the only known sample of lunar soil in private hands along with the provenance to back it up, these are very valuable. In fact, they last sold at auction in 1993 for $442,500. That buyer is now selling them again and the samples are expected to fetch between $700,000 and $1 million at a Sotheby’s auction called “Space Exploration,” taking place in New York on November 29.