Meet Chicken-Walker 2.0 everyone. This past Halloween, the weird looking Cassie humanoid-legged robot donned a Star Wars AT-ST costume made by members of its build team at Oregon State University’s Dynamic Robotics Lab. So basically these engineers are Imperials, now creating the Empire’s latest toys. I can’t wait to see their Star Destroyers and Death Stars. 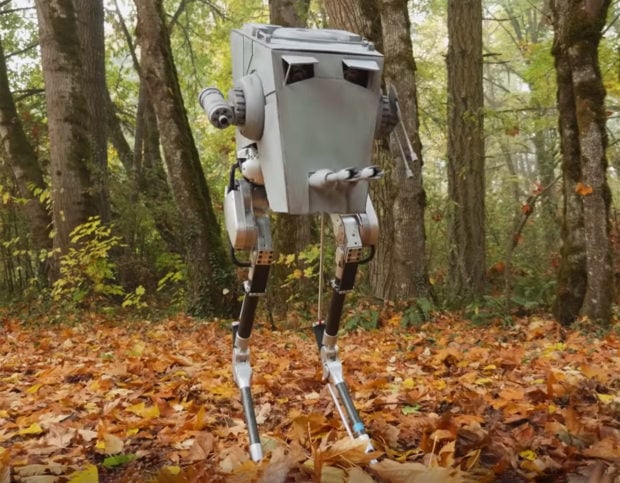 They also added some CG blaster cannon effects to the video for more realism. Though it probably won’t be long until it can really do that on its own. I think it’s time to recruit an Ewok army so we can be ready to take it down. No one deals with the Empire like those little furry freaks.

I hope someone invents a thermal detonator so I can use it on these wobbly monstrosities. At least they’re easy to trip. Stupid robot scientists. I’m surprised they didn’t give it some hands so it can hold a knife and a gun. Seriously, what the hell is wrong with you people? Do you really want to be the last people on Earth with a bunch of robots? Well, I admit it does sound appealing.

I love the way it moves its legs like it has to pee too. Nice touch.

[via Nerdist via Geekologie]