Odd Alarm Wakes You To The Sound of a Puking Dog

Odd Alarm is a new app that will wake you up by using a bunch of odd sounds that your mind will find impossible to ignore. It’s available for iOS and Android, but this app isn’t full of the usual chimes and jaunty tunes. Instead, you get sounds you can’t ignore like cats fighting, gunshots, and even a dog getting ready to throw up. 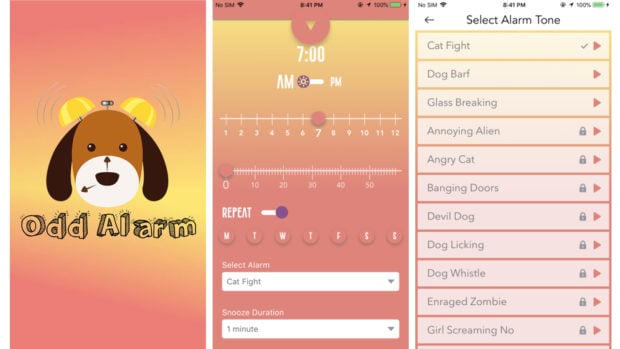 Yeah, that’ll wake you up for sure. Cat fight, dog barf, and glass breaking are all solid choices to wake up to, but there are 17 other sounds too. There’s someone banging on your front door, a smoke alarm, enraged zombie, girl screaming, a devil dog, annoying alien and more, but these will cost you $0.99 each.

If these sounds get old and no longer wake you up, Odd Alarm also includes a “chase the morning sun” feature requiring you to drag an Off button onto a moving sun target to turn the alarm, and you’ll definitely have to be awake to do this.

Other sounds they should have included are angry landlord, party upstairs, and ex-wife screaming about alimony. When other alarm clocks fail to wake you, Odd Alarm should do the job… for awhile at least.

[via The Gadgeteer via Gizmodo]