Astrobees may sound like cyborg killer insects that invade Earth to make honey from our flesh, but they actually have an Earthly origin. They are robots created by humans to help astronauts in space. 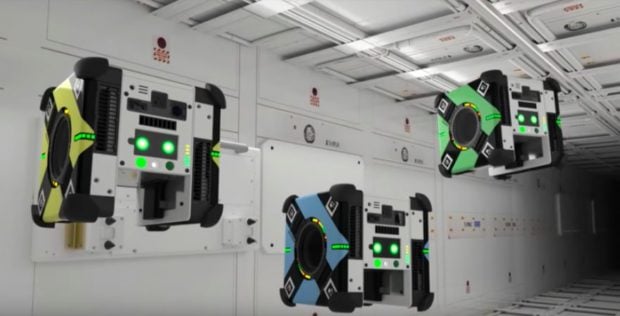 Astrobees are flying robots who will help astronauts with their missions. Not enslave humanity – at least not yet. They’re designed to float inside the ISS, using fans to direct their course. NASA will send three of them, named Honey, Queen, and Bumble, to the International Space Station where they will be helping scientists and other researchers achieve tasks.

“The main purpose of the Astrobee platform is to provide a zero-gravity testbed for guest scientists to try out new robotic technologies in space,” says Maria Bualat, Astrobee project manager at NASA’s Ames Research Center in California’s Silicon Valley, in a press statement. “Astrobee will prove out robotic capabilities that will enable and enhance human exploration. Performing such experiments in zero gravity will ultimately help develop new hardware and software for future space missions.” We’re pretty sure she meant microgravity, as zero gravity isn’t really a thing in space.

So these cube-shaped robots are just fancy astronaut assistants. They look pretty cool though and have a very Pixar look to them. They do look like trouble though. I’m not sure I would trust them. They are up to no good. You never know. As we’ve learned from science fiction, anything can happen up there.

[via Popular Mechanics via Neatorama]