Most audio output devices fall into one of two categories: headphones for personal listening, and loudspeakers for group listening. But Sony’s new device falls somewhere between the two – a speaker you can wear. The SRS-WS1 is designed for those times that you want the sound quality and volume of a loudspeakers, but don’t want to wake the whole house. 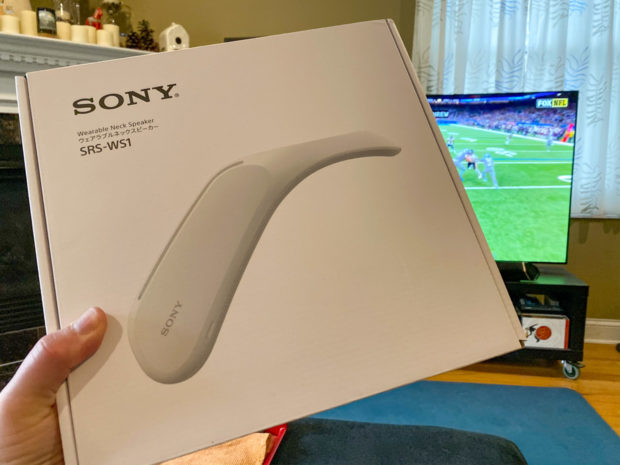 Rather than pressing up against your ears or sitting inside of them, the SRS-WS1 sits around your neck and rests on your shoulders, using a unique acoustic design to channel audio to your ears. Additionally, it enhances the sound by producing vibrations you can feel. This design produces big sounds, while still allowing you to hear ambient sounds, which makes them great for people who might still need to be aware of their surroundings while enjoying high quality audio. 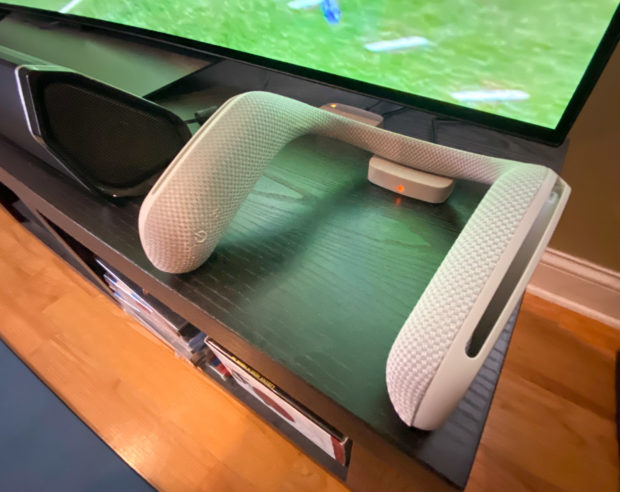 Setting up the SRS-WS1 is easy. Simply place the wireless transmitter and charging base on your table near your television or other audio source, then plug in the included optical or 3.5mm analog cable to its audio output. Just be sure to set your audio output to PCM if you’re using the digital connection. The wearable speaker operates wirelessly from up to about 25 feet away, letting you enjoy movies, TV, and video games from your couch. It runs for up to 7 hours on a charge, and can be juiced back up by docking the speaker on the charging base. It’s not a huge deal, but I would have liked to see the charging base and wireless transmitter combined into a single device instead of two. 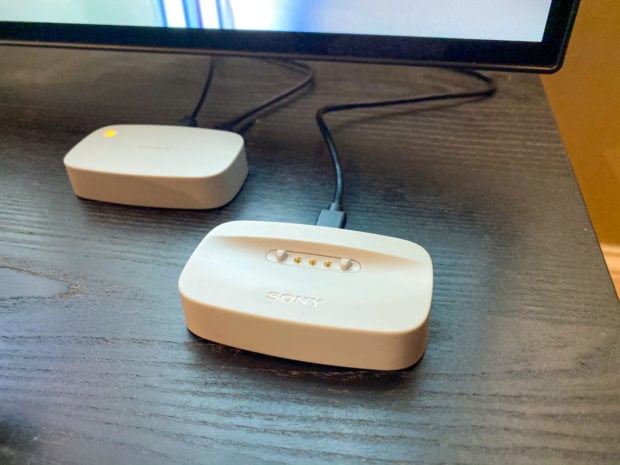 What’s particularly impressive is just how rich and impactful the sound is with the wearable speakers sitting over your shoulders. There’s plenty of volume, and a nice, immersive soundstage, with crisp and clear dialogue, and surprising dynamic range. The vibration effect is pretty cool too, adding some thump to the low end. It’s not the bass boom you might be used to, it’s more of a haptic rumble sensation. Depending on your preferences, Sony lets you choose from three different intensity levels for the vibration feedback. 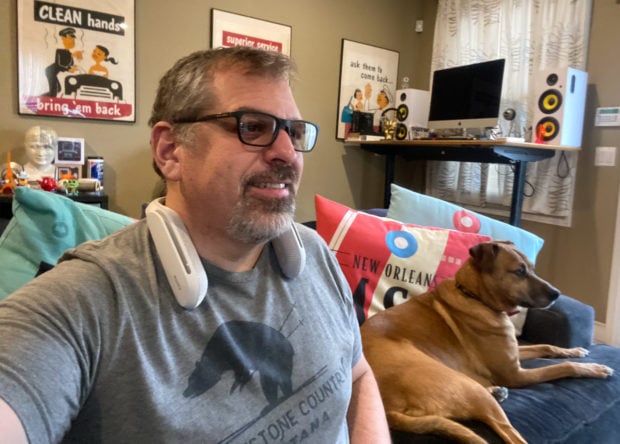 One thing I really enjoyed about wearing the SRS-WS1 was how much more comfortable they are than wearing headphones. I could see wearing these for hours without the fatigue that headphones can cause. It’s also really nice to be able to get up from the couch and walk to the kitchen and still hear your audio just as clearly and without volume changes. Keep in mind, unlike some headphones, others can hear what you’re listening too when they’re nearby. You won’t hear the sound in an adjacent room or across the house, but you can definitely hear it if you’re sitting next to someone wearing the speakers, and from several feet away.

While they’re primarily designed for listening to TV audio, they can be connected directly to other devices the included 3.5mm audio adapter cable. That said, I really wish they had included Bluetooth functionality, as I’d love to listen to music from my iPhone with these too. 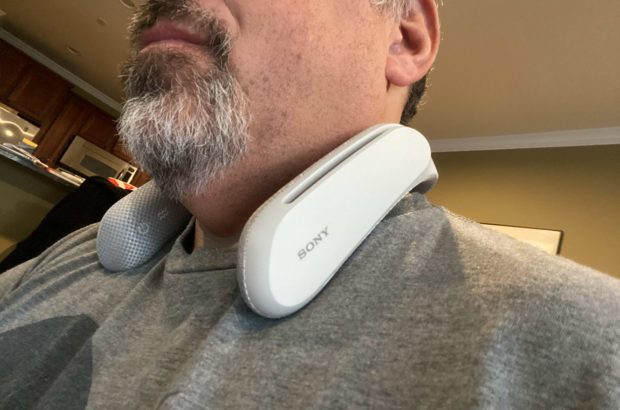 In today’s sea of gadget homogeneity, it’s refreshing to see Sony step out of the box and create something that’s really unique and innovative here. It’s kind of niche in its use cases, but if you want great sound quality without disturbing the whole house, and would like something more comfortable than headphones, the SRS-WS1 is definitely worth considering. They’re available now, direct from Sony for $299.99.

Edifier Airpulse A300 Speaker Review: Studio Sound on Your Bookshelf