Are Wii Too Lazy?

If you ask Lionhead Studios founder and game designer of legend, Peter Molyneux, the answer is ‘yes.’ In a speech he made at this week’s Leipzig Games Convention, he was quoted as saying:

I’ve realised I’m an incredibly lazy person when I play games, and actually slouching back on the sofa, playing on my beer belly, is my most comfortable position. When I have to get up, it’s painful. I make noises and start grunting. 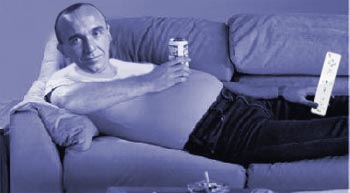 Sound familiar? In his speech he expressed concern that the actions required to use the new Nintendo Wii controller can be physically exhausting, not to mention that thay make you look silly while playing. So what do you think? Will the Wii make us couch potatoes get up off of our asses, or will the novelty wear off quickly, and have us longing for our old Wavebird controllers?