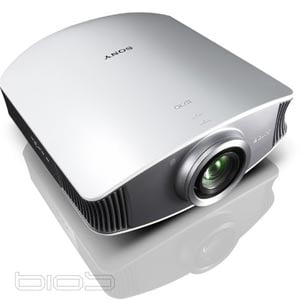 The new model features an array of three 0.61-inch SXRD chips at a full 1080p (1920×1080) resolution, capable of outputting all currently available high definition signals at full resolution. SXRD (Silicon X-tal Reflective Display), also known as LCOS (Liquid Crystal on Silicon,) is reknowned for its extremely good black levels, and lack of visible pixel structure. The majority of sets from Sony and JVC (under the name D-ILA) have received rave reviews for picture quality.

The VPL-VW50 features Sony’s Advanced Iris 2 technology, designed to provide a dynamic contrast ratio of up to 15,000:1. The projector also features a powered 1.8x zoom lens, with powered vertical shift for installation to maximize installation flexibility.

Inputs include: dual HDMI inputs capable of 1080p (in both 60 and 24p frame rates,) RGB, S-video, composite and RS-232C. Fan noise is kept to <22dB, making it an ideal fit home theater applications. The VPL-VW50 is the first SXRD front projector from Sony to break the $5,000 price barrier (at $4999.99 USD), and will be available this month from Sony's own stores and website and authorized dealers.