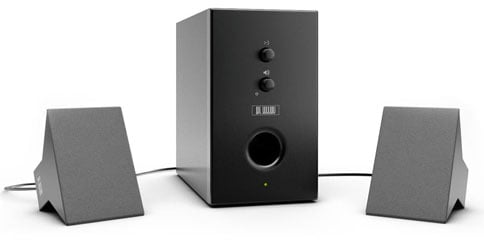 Now his clean, minimal designs will be showing up in a new desktop speaker system. Art’s new Sonicum speaker system is a 2.1 system featuring two satellite speakers and a powered subwoofer. Power specs aren’t overly impressive at 5w per channel for the satellites and 15w for the subwoofer, but the speaker’s flat NXT drivers are known for quality sound reproduction at relatively low power levels. The complete system will be released in April 2007 for appx. $152 USD, but a pre-order special is being offered for appx. $126 USD.