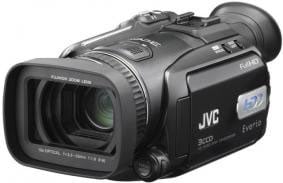 It features a 10x optical zoom Fujinon lens, as well as optical image stabilization. The $1800 JVC Everio GZ-HD7 offers both point-and-shoot automation, as well as a variety of manual controls for focus, white balance, exposure, shutter and aperture controls and sharpness. The camera offers USB and i.LINK (Firewire) interfaces for moving data to a computer for editing, as well as an HDMI port for hooking directly to a TV for playback.

In addition, JVC plans to release an add-on DVD burner, the Share Station CU-VD40 ($400), which can be used to archive recorded footage without a computer, as well as to play back footage directly from an internal HDMI connection.