Designed primarily for commercial installations such as in shopping malls and at special events, these LED-based televisions can display 360-degree panoramic video. 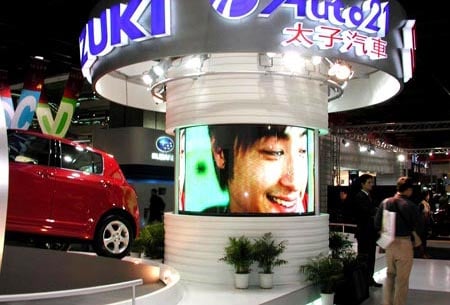 Dynascan’s systems display video all the way across the surface of a cylindrical fixture, using thousands or super-bright LEDs to produce an image. Dynascan developed a proprietary technology which spins LEDs around a drum to produces all light colors at the same pixel location, rather than using clusters of adjacent red, green and blue LEDs, which is typical in large color LED systems. The result is a much finer level of detail and better color accuracy than could be achieved with a standard grid of LEDs.

The displays have already been featured in aiports and malls all around the world, so it’s only a matter of time before we start seeing these all over the place.