Sharp just introduced a shmancy new handheld in Japan, called the EM ONE. Highlights of the new PocketPC include a large 4.1-inch touchscreen display and dual-slider tray that provides easy access to a full QWERTY keyboard and navigation controls. 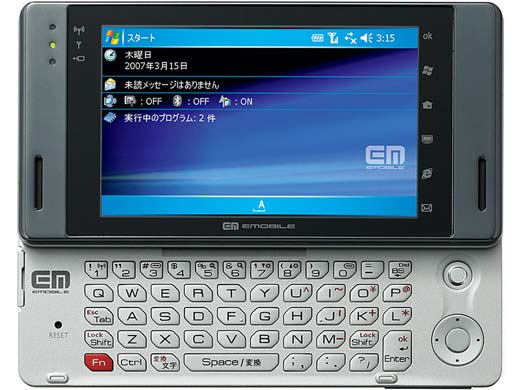 The Windows Mobile 5.0-based device is designed for both productivity applications and media playback, and its hardware looks like it’s up to the task. With the EM ONE’s staggering 800×480 resolution, you’ll be able to browse the web without squinting this time. Just as importantly, you’ll be able to surf quickly, with both Wi-Fi (802.11b/g) and 3.6MBps HSDPA connectivity built in. The device is jam packed with goodies such as nVidia GoForce 500 graphics, a 520MHz PXA270 CPU, a 1.3 megapixel camera and Bluetooth.