Giant Robot Dinosaurs Walk Among Us

This nifty bit of robot footage comes to us from Japan’s National Institute of Advanced Industrial Science and Technology (AIST). 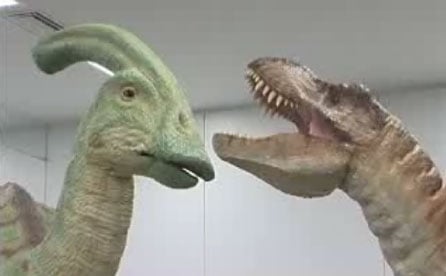 Back at the end of 2005, the Institute developed two animatronic dinosaurs (one Tyrannosaurus Rex, one Parasaurolophus) that could actually balance and walk without any external stability systems. This is the first time I’ve seen any footage of them in action, so I thought I’d share it with you:

Every kid’s gonna want one of these. All they’re missing are frickin’ laser beams on their heads.