While there aren’t a tremendous number of current titles to get excited about on the PlayStation 3, one future title that does have me in a lather is the upcoming Ratchet and Clank Future Tools of Destruction. 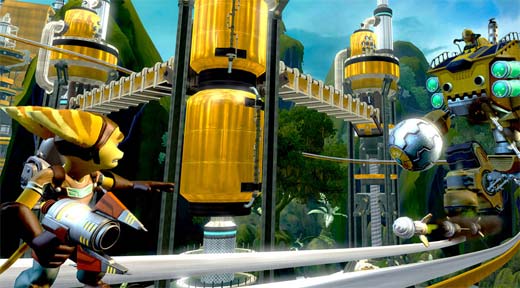 The great folks over at Destructoid have posted a gallery of beautiful high-definition screens and video from the upcoming PS3 game, and it really is looking purty. It’s nice to see a PS3 title that’s not trying to be either photorealistic or grey and gloomy. The new game maintains the great cartoony, colorful feel of the classic PS2 Ratchet games, while amping things up to take advantage of the PS3’s superior graphical horsepower.

A high-definition version of the video can be downloaded here.

If Insomniac manages to deliver the quality of game that we’re used to from the Ratchet series, this PS3 exclusive could definitely be one of those must-have titles when it hits this Fall.