Here’s an interesting phone out of China that steals a page out of the Samsung F520 book with an interesting dual-slider design that conceals both phone and gaming controls. 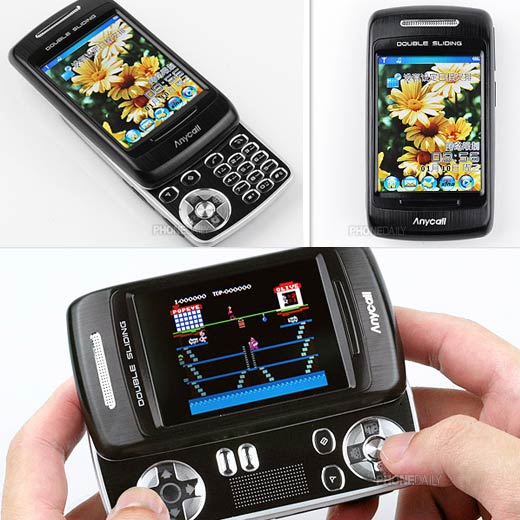 When oriented in portrait mode, the slider reveals a dialing and menu navigation buttons, but when turned to landscape mode, out pops a dual joypad design for playing games. The Anycall 5200 even goes so far as to stick a mock PSP logo on the back as a tip of the hat to its gaming aspirations. Now my Chinese isn’t very good, but it does sound like the phone plays emulated ROMs from retro arcade and console games, rather than new games designed just for the phone.

In addition to gaming features, the phone offers MP3/MP3 playback, a digital camera and a basic WAP browsing capabilities. Thanks to its large 320×240 color display, video playback and gaming look really slick. I was able to find these for sale on the eBay India website for about $300, but the phone looks like it won’t work on North American networks.

[CAVEAT EMPTOR: Even though it carries an “Anycall” name, this phone is NOT made by Samsung, and is a cheap Chinese knock-off design that happens to have some nifty features.]