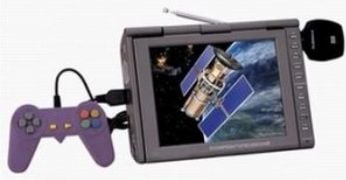 Leave it to the folks in China to bring us a single portable gadget that crams so much into such a little package.

The TX-0088 Portable DVD Player not only features movie playback from DVDs, it can also play MP4 format videos burned to disc or a USB flash drive. The player’s TV receiver can handle over the air television broadcasts in PAL, SECAM and NTSC formats, so it should work just about anywhere in the world.

In addition, it can play emulated classic games from the Nintendo NES 8-bit console. It even ships with two controllers so you can get your retro game on. About the only downside I can see is the player’s 8-inch screen which is a standard def 4:3 ratio, so DVD playback will be cropped or letterboxed.

In the sound department, the TX-0088 offers Dolby Digital and DTS surround sound via an optical output, as well as built-in virtual surround sound. You can also transmit the audio signal to your car stereo via the player’s FM transmitter. If you just want to listen to the radio, its got its own FM tuner built in too.

The whole system is available from importer Chinavasion for the odd price of $172.59.