Dectop: a Basic Server for Under $100

Need a second computer to run some basic tasks like hosting a website or a file server? Want to spend less than one big bill on it? Then look no further than this compact system from Data Evolution Corporation (DEC). 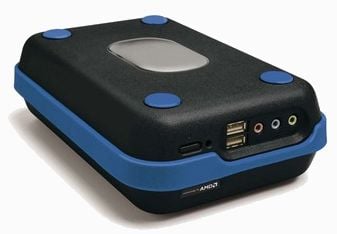 The decTOP computer system was originally released by AMD as a thin personal web browsing appliance, but when DEC acquired this division of the company, they revamped it as an all-around compact server. The system comes with 128MB of RAM, a 10GB hard drive (both of which are expandable), and runs a 333MHz AMD processor. It’s no powerhouse, but more than enough for running a web server or other lightweight applications. It’s got built-in VGA video, Ethernet, a modem, USB and even audio capabilities. The decTOP measures in at just 5.5″ x 8.5″ x 2.5″ and weighs just about three pounds, so you could easily throw one in your suitcase or backpack if you’re looking for portability.

There’s no OS provided for the computer, but JSCO offers this simple tutorial on installing Ubuntu. I’m sure installing other flavors of Unix wouldn’t be difficult either. You can pick up a decTOP from Data Evolution for just $99.