New Zealand digital artist Julian Oliver is working on a cool game that blends the electronic universe with the real world. His work-in-progress game called levelHead uses a series of cubes placed on a table top. Digital cameras and custom software sense the movements of the cubes and superimpose digital images of a tiny little 3-dimensional gameplay universe. 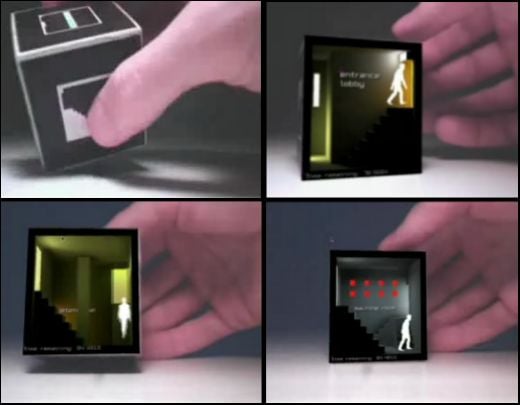 As you tilt each cube, the player climbs through the environment, moving in concert with the angles of the physical cube. The objective of the game is to move the cubes to help guide the digital player to the exit of each cube’s virtual environment. Some of the doorways lead to another cube, while other are dead ends that make you start all over. The whole interaction looks like a Michel Gondry video to me.

Oliver developed the game to run under Debian or Ubuntu Linux, and plans on releasing it as an open source project soon.