Sick of all those newfangled games on your Nintendo DS? This new gadget lets you dust off your old 8-bit games and play them on your DS Lite. 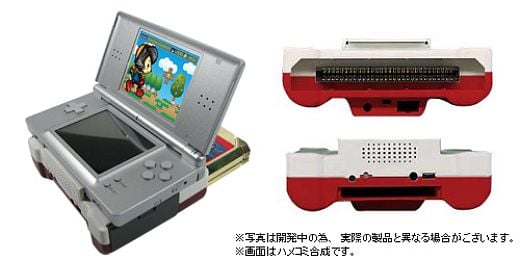 The CYBER Familator Lite plugs into your DS Lite’s GBA adapter slot and lets you plug in carts from the old Nintendo Famicom (aka NES here in the states), and play them right on the DS screen. While it’s designed to play Japanese Famicom titles, you should be able to play NES titles on it too if you manage to get your hands on a Famicom->NES adapter cartridge.

The fact that the Familator Lite is about twice the size of the DS itself makes it a little impractical, but if you just have to get a fix of your favorite 8-bit titles, it could be worth a look.