Sure, there are lots of devices which are starting to embed motion sensors or touch screens to power new user interface paradigms. But this is the first time I’ve seen a motion-sensitive device which is designed to be operated entirely with one hand. 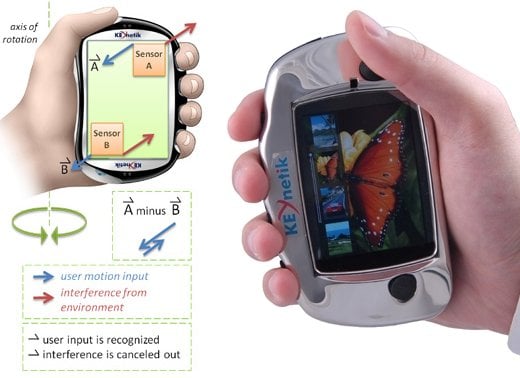 KEYnetik’s motion interface system uses multiple accelerometers to detect not just the direction of movement, but to triangulate where force originates from. The dual-sensor design is also immune to minor, unintentional motions (a.k.a. “motion interference”). The system can detect user gestures and translate them into on-screen interactions. By combining the motion-based interface with side-grip finger controls and joysticks, an entire device can be controlled with just one hand, freeing your other digits for, um, whatever you need them available for.

An added benefit of the design is that it’s totally ambidextrous. Just flip a KEYnetik-powered device over, and it’ll automatically get its bearings and adjust the interface appropriately.

In addition to the prototype device (above), KEYnetik has already completed a proof-of-concept implementation on the Nokia N95 (below), called “RockNScroll”. N95 owners will be able to download RockNScroll for free by registering on the KEYnetik forums.

The gestures in these prototype videos are arguably a bit exaggerated, but hopefully they’ll find a way to tone them down and keep users from ending up with some nasty repetitive strain injuries.