Trains That Pick You Up Without Stopping

This is a concept for Singapore’s Metro Rail Line so that trains can pick people up without ever stopping. That sounds impossible, right? 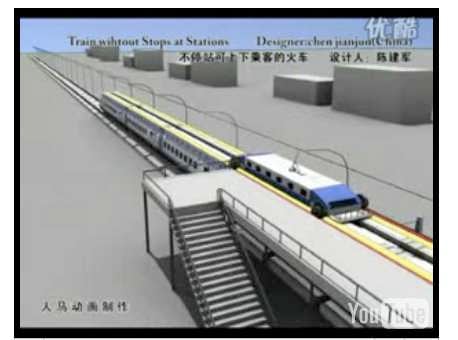 The idea is that people who want to board the train get into a smaller car that piggybacks onto the moving train as it passes through the station. To get off, you get into the smaller upper car while on the train and it unhitches at the station. If what I just said was totally confusing to you, then you should watch this video clip to clarify. The clip is in Chinese (I think) but the graphics are self-explanatory and show how this concept would work.

Not only would this make overall train speed faster, since you don’t have to average in stopping times, but it would also be more energy efficient. Also, it’s super cool and futuristic.

You can read more about this concept, and its inventor Peng Yu-Lun, in this Taiwan Headlines article.