While the October 2008 issue of Esquire magazine got lots of buzz in the marketplace with its E-Ink cover, I have to say I was pretty underwhelmed by the less than exciting visual produced by the blinking display. That said, the real magic of the electronic ink display tech could be its sheer durability. 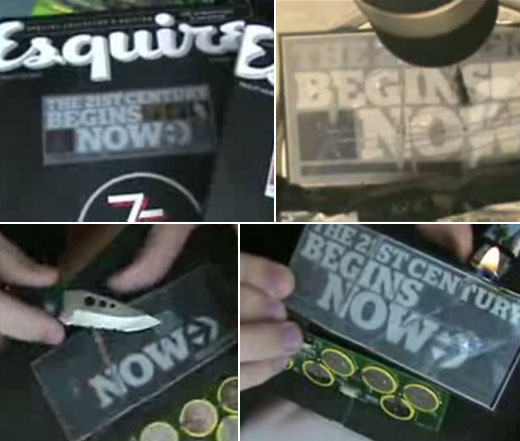 In this video clip by the guys over at Phone Losers of America, the E-Ink display is subject to various torture tests, including bending, flexing, knife cuts, drilling, water, and fire. Amazingly, the display continues to operate throughout much of the destruction.

Color me impressed. I can only imagine this technology powering a bendy digital newspaper which could be rolled up, thrown in your bag, read in the shower, and even carried around in my dog’s mouth just like the real paper.

The only question I have is… but will it blend?