So maybe it won’t make the Kessel Run in less than 12 parsecs, but this Millennium Falcon sled should take you down the neighborhood snow mound in 10 seconds flat. 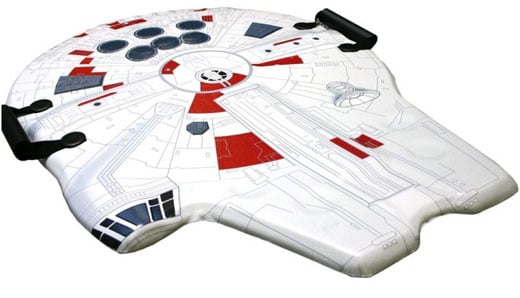 The colorful snow sled doesn’t have the battle scars that the real Falcon has seen, but I’m sure after a few wipeouts (or laser cannon blasts from your neighbor with the personal TIE Fighter), you’ll have it looking pretty close. The sled is only big enough to hold one passenger, so you’ll have to decide if you want Chewbacca or Han to fly solo.

Sure, it’s not as cool as the handmade X-Wing Fighter sled, but this one is only $35 bucks and it probably wont’ break into pieces after a single run. Last I checked, the Millennium Falcon sled was out of stock over on Amazon, but you can get yourself on the backorder list so you can get yours just in time for all the snow to melt.