Sure, you could be playing ping pong on your Nintendo Wii, but why would you play on a system with a boring rectangular sensor bar you can have a video game console comes with a receiver that looks like a penguin? 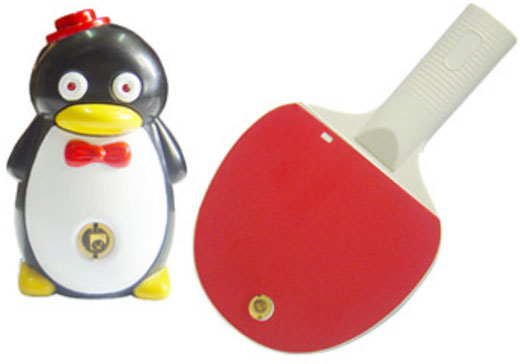 Thankfully, placing this penguin on top of your television will not cause it to explode, but it will, let you play a table tennis video game using a wireless remote paddle controller. I probably don’t have to tell you this, but I’m pretty sure that you’re not going to get a Wii quality experience here. That said, if you’re too cheap to buy a modern console, or just enjoyed both Happy Feet and Balls of Fury (boy, does that sound strange), then this system is for you.

The console not only plays ping pong, but another 23 supposedly “16-bit” video games as well. I haven’t been able to scrounge up any pictures of the console itself, or screenshots any of the games the system plays, but the description sounds strikingly similar to this far less compelling non-penguin version I found over on eBay, which includes such wonderful sounding games as Agreesorunder, Bounce Wavebug, S-Move Space, Mag Fox and Survivor Tryst – which sounds alot like a reality TV show.

If you’re interested in checking one out, you can find these oddities over at Philippine electronics outlet Electrobrain Enterprises for $30 bills (USD).