If you were campaigning to put an end to violence, would you threaten to beat up your audience to drive home that “violence = badong”?  No? That’s because you’re not a genius. From now on let such sublime logic be known as WWBGD – What Would Bill Gates Do? Microsoft’s chairman was at the TED (Technology, Entertainment and Design) 2009 conference to help raise awareness against diseases that plague developing countries. 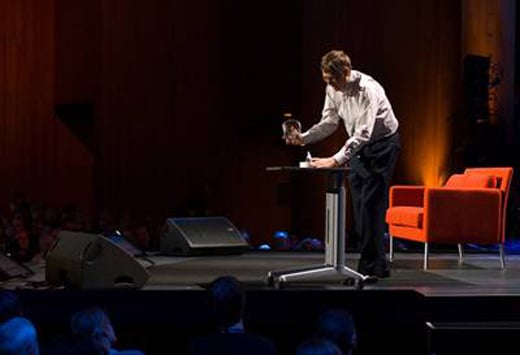 One of those diseases is malaria, and so Gates was calling for support from rich governments to help fund efforts against the disease.  Malaria has been eliminated in first-world countries in 1970 through the development of the drug quinine, but it’s still present in third-world countries. Hence Gates’ little joke: he opened a jar containing “more than a few, but probably fewer than ten” mosquitoes and said, “we’ll let them roam around the auditorium. There’s no reason only the poor should experience this…”

Techflash confirms the expected: the mosquitoes weren’t carrying malaria. But I think he still scared – and pissed off – a few people in the crowd. Up next: Gates campaigns for better internet security, aims to raise awareness about viruses… and trojans?