The classic anime series Patlabor was set in the late 90’s/ early 2000’s. In it, the Tokyo Metropolitan Police use giant humanoid robots to fight crime. While they’re not quite there yet,there is absolutely no doubt in my mind that the Japanese will reach that level of awesomeness, such that geeks will commit crimes just so they can be arrested by giant robots. How did I come to that conclusion? Well if all it takes is one Japanese man to build a giant robot beetle in his backyard, then the Japanese government can certainly build a fleet of robot police. 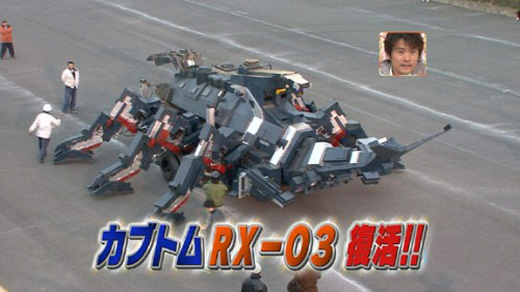 The beetle’s legs can’t support its body so it has wheels, and even then it’s pretty slow. And I don’t think it has weapons of any sort, but come on, this is the work of one man. One. What if there were two of them? Three? A whole nation?

Adidas should get this guy for their Impossible is Nothing ads.