New Zealand has given us many great things. Sheep, Kiwis, Lord of the Rings, Eagle vs. Shark, Flight of the Conchords, and now the one-handed ambidextrous ergonomic mouse-ball. What will they think of next? 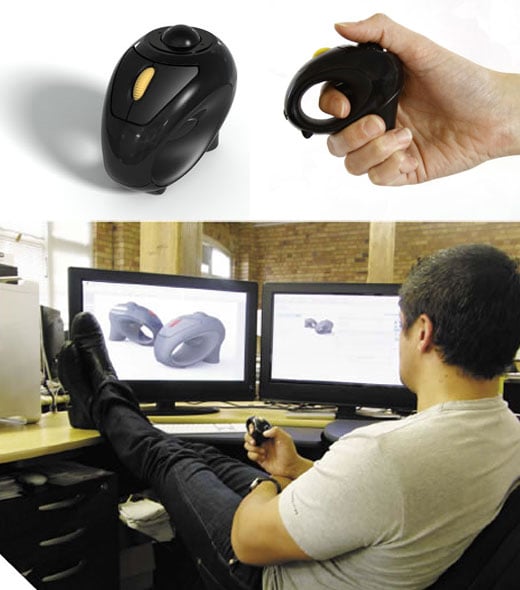 The WeraMouse V2 (aka the Ergotouch Mouse) is just a little smaller than a conventional mouse, but you don’t put it on your desktop. Instead, you hold the WeraMouse in your hand and operate your computer wirelessly from up to 25 feet away.  Technically, it’s not a mouse at all – it’s a trackball with a scroll wheel and a pistol-grip button. The one-handed wireless controller is said to reduce wrist strain and allow you to remain in a more neutral posture than you do when using a traditional mouse (although the guy in the picture above looks like he’s setting a pretty bad example for “good posture”). Battery life for the WeraMouse is rated at up to 28 hours on a single charge, and when it’s not in use, there’s a charging dock that’ll juice the WeraMouse back up in about 90 minutes.

The WeraMouse V2 retails for $99 (USD), and it looks like the Ergotouch guys are working on a WeraMouse V3 that uses a trackpad instead of a trackball, in case you prefer your mice without any balls.

These Colorful Keyboards Add Pizzazz to Your Desktop
Advertisement