In the post-apocalyptic world of 2018, mankind is nearly eradicated; the literally cold and heartless Skynet computer system is so ruthless and intelligent – except for the fact that it has a logo. What for? To market itself? How about you stop killing your customers first? – and is on the verge of debuting a new weapon that could spell the end for the remaining humans on Earth, Ahnold the T-800 Terminator. Fortunately, the Resistance forces have a weapon of their own: Twitter. DUN DUN DUN DUUUUUUUUUUUN

Twitterers help the Resistance by decoding the encrypted Skynet transmissions that are intercepted by other Resistance members at Resistance2018. The messages come in three variations: one is a word mix (WM), the other is a partial transmission (PT), and the last, and perhaps most ridiculous of all, is the trivia (TR). Why bother to create this fantasy setting for the game if you’re going to shatter it with your mechanics? Never mind the god-awful “encryption” methods that Skynet uses. Why the hell would it send trivia messages to its minions?

That’s the first intercepted transmission. Why, in the name of all that is sensible, would the enemy send this? The answer: to occupy the Resistance force’s time, because they are obviously sticklers for word games.

Sony’s concept isn’t all that bad though, because in between the stupid games, are Skynet Warnings (SW), and those bits and pieces of pretend news reports are the ones that gives the game some sort of verisimilitude. 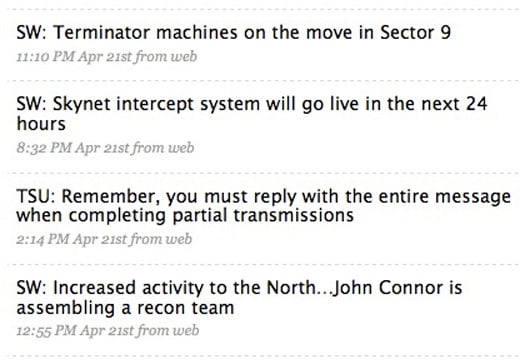 I am obviously taking what is merely an elaborate advertisement all too seriously, but I just thought that it was such an awesome idea when I first read about it at UPI. I thought that some members would become Skynet and the others will be Resistance forces or something like that. But if you’re still interested, you can check out the game’s website for more instructions.

The Skynet Warnings make me wonder: have people tried playing D&D on Twitter? I think it would work. At least it would be better than this shallow farce. Okay you know what? Let’s give it a try: Wanna know how I found the UPI article? Decode this: VIA TWITTER. Wait. Dammit.