Walky Lets You Control Robots via Finger Gestures, Turns iPhone Into a Wii

Yuta Sugiura and his colleagues at the Graduate School of Media Design in Keio University had a valid starting point – most of the software or hardware input systems today have no direct correlation to the command to be executed, and so are not that easy to master. As high-tech items like robots become more mainstream, easy methods of interaction and operation becomes more important. So Sugiura and company proposed a natural input system for controlling humanoid robots with their custom iPhone app, Walky. 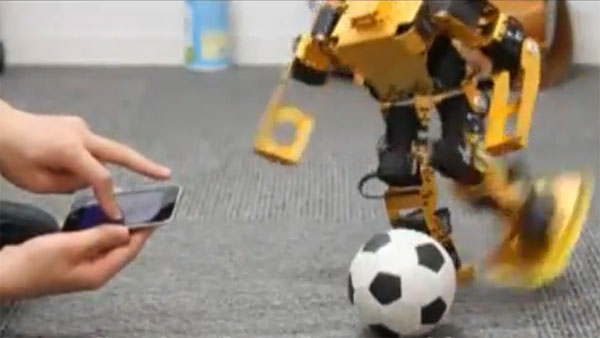 Walky’s interface is idiotproof – make your fingers walk and the robot walks, make a jumping gesture and the robot jumps, kick and the robot kicks. You can imagine how much easier it would be to teach people how to control robots using a system like this as opposed to something that uses an array of buttons, levers and knobs. Nintendo hit upon that idea too, and turned it into lots of money by creating the Wii. Hand over a gamepad to an inexperienced gamer and you’ll have to spend quite some time explaining the controls before the person gets the hang of it, but give that same person a Wii and he won’t even need your help because the input system is much more natural. But is gesture-based input really the simplest and most practical input system?

I don’t know about you, but I’m gonna have to side with buttons, levers and knobs for now. If you watched the video you saw how freakin’ cumbersome the system was; there was simply too much effort needed for a simple command. Maybe gesture-based systems are okay for entertainment or educational purposes – Walky is indeed a fun way of introducing robotics to kids – but if I had to use a natural input system I’d rather it be a voice-operated one.