Living With the Hp Touchsmart 600: Part 1

The guys over at HP asked me to take a challenge – to see if I could live with their TouchSmart 600 computer as a serious all-in-one entertainment hub. Over the the last couple of weeks, I’ve had the chance to put the TouchSmart through its paces and will be sharing my experiences with you during the course of the week. 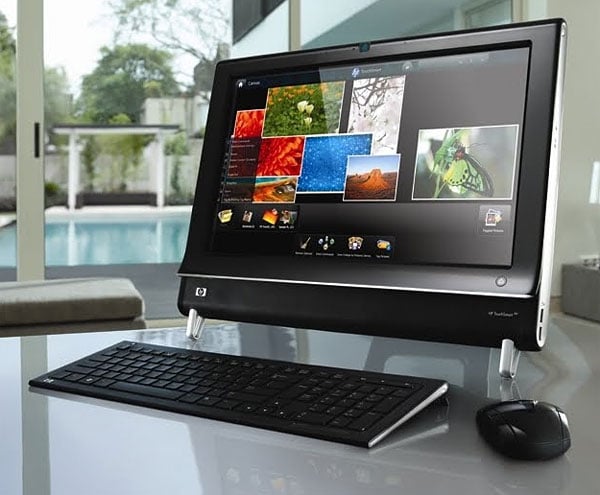 Since this is the first post in the series, I thought I’d take a minute to walk you through the TouchSmart 600’s hardware. The particular configuration I had my hands on was the 600-1055. The system features a beautiful 23-inch widescreen display, powered by NextWindow’s optical multitouch technology. Since the display uses an infrared touch technology, it can only handle two points of input, but that’s enough for manipulating simple media interfaces and handling gestures like flicks, pinch and zoom with aplomb. The system also has a high quality sound system built in, and the audio is certainly as good as anything you’d find built into a good television these days. It’s no substitute for a full surround rig, but it’s fine for a small room. And of course, there is an SPDIF optical output if you really do want to hook the TouchSmart to a proper surround system.

Under the hood, there’s a serviceable Core 2 Duo P7450, running a 2.13GHz, and the system has 4GB of RAM and a speedy 7200RPM 750GB SATA hard drive, perfect for recording television programs and handling other media utility work – right in the sweet spot for this machine. The system ships with Windows 7 Home Premium, 64-bit edition, so they didn’t skimp on the OS, either.

My first objective with the TouchSmart was to see how well it would work as a TV/DVR. The timing for this couldn’t have been better, as my brand new 58-inch Samsung plasma died and we had no TV in our living room for the last month (eeegads!) So while I wouldn’t normally recommend using a 23-inch display as your primary television, it worked for us in a pinch. The TouchSmart’s display size is definitely better suited to a bedroom, or maybe an office or den. It’s just a little large for most kitchens, but they do offer a 20-inch model as well. 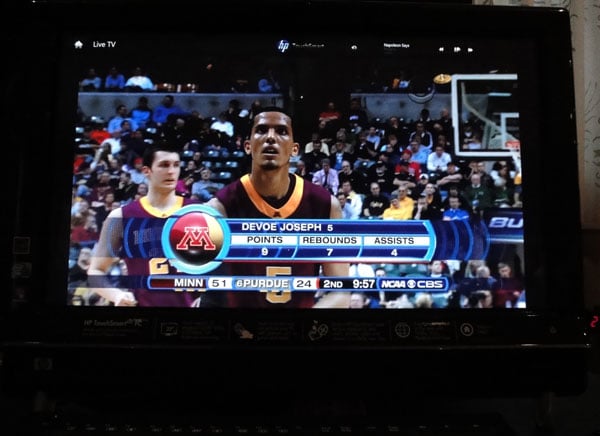 So, back to the TV/DVR thing. There are a few ways to slice and dice this on the TouchSmart, and that’s part of the beauty of this thing. You can watch live television using the computer’s built in Digital ATSC tuner, and using either the included TouchSmart software or Windows Media Center, you can view live programs, and record them for later playback. I personally preferred the Windows Media software for this, as it works with the bundled remote control, and was a bit zippier than the TouchSmart interface. That said, the TouchSmart version does work well if you plan on primarily the touch screen for input, so maybe it would be good in a small room where you will be right by the screen all the time. 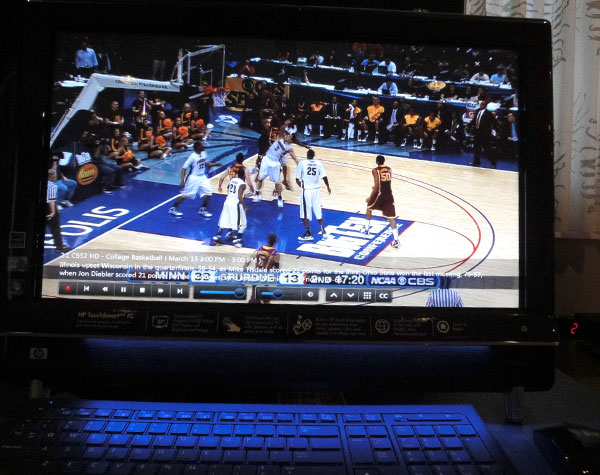 I recorded several programs in both the foreground and background, and didn’t run into any problems with playback quality, even for 720p and 1080i HD broadcasts. Oddly enough, I did run into some stutter on HD content in the TouchSmart app during live TV though, but it’s possible some sort of background task (maybe anti-virus or system updates) was hogging resources. This only occurred once or twice in my experience. The recording worked fine, even in the background while other tasks were going on, although since there’s only a single tuner, you won’t be able to record two programs at the same time like you can with some DVRs. However, I couldn’t figure out a way to pause or scrub that program while the program was recording using the TouchSmart software. It works fine with a live program that you’re not currently recording, though, so go figure.

That all said, I felt that the program guide interface for the Windows Media side of the house was much easier to read from a distance and found more APG program data than the TouchSmart version managed to muster. That said, the system includes both interfaces, so its your choice. Here’s the TouchSmart running Windows Media Center Live TV for comparison: 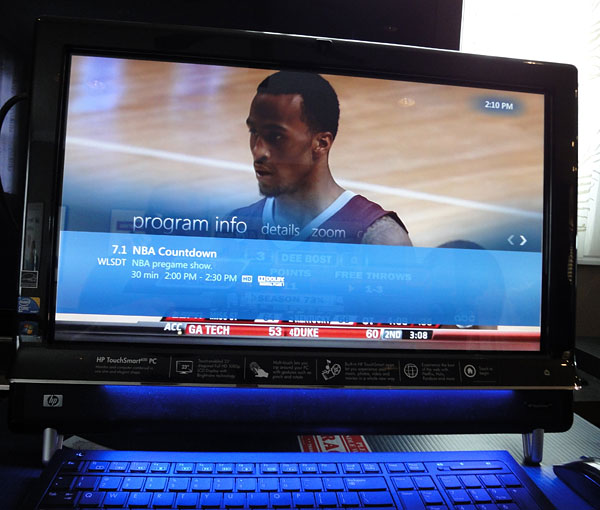 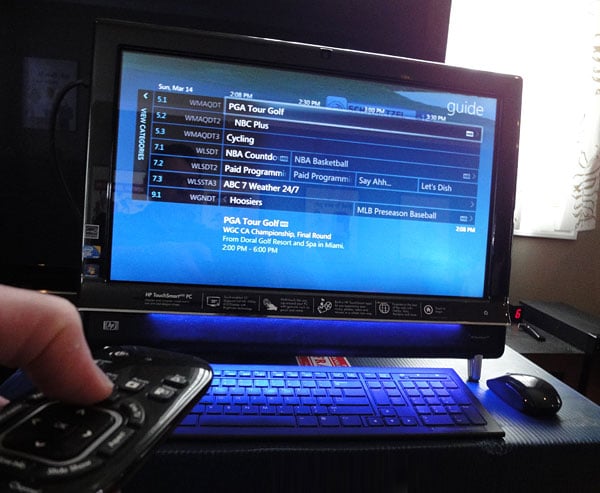 In addition to over-the-air television, the TouchSmart software includes apps for Netflix and Hulu, both of which performed admirably, and featured touch-enhanced interfaces with bigger buttons, and nice scrub bars for jumping through content. I’ll be covering the DVD/Blu-Ray and streaming video capabilities in more detail in my next post. 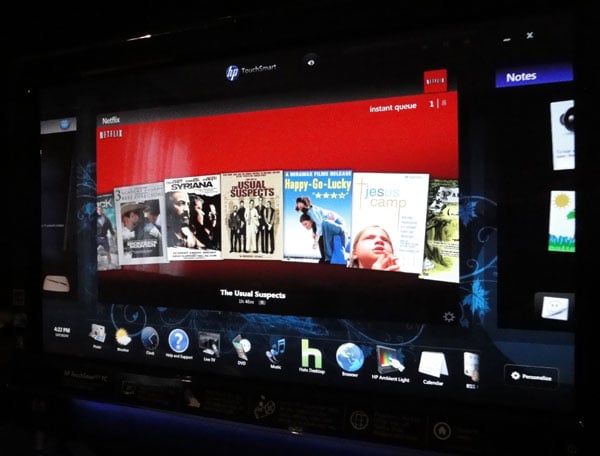 But what if you’ve got a satellite or fiber-optic receiver? With most desktop PCs, you’d be out of luck. There’s an S-Video input and an IR blaster output if you want to use a set-top tuner with Windows Media Center. And while you can’t use the built-in media or touchscreen software to watch from one of these devices in high-def, the TouchSmart has a handy HDMI input on the side, which lets you flip out of computer mode, and use it just like a regular HDTV. 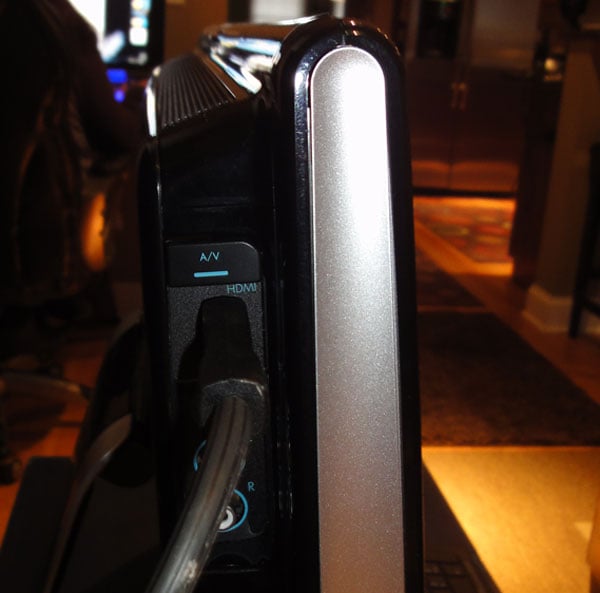 I tried it with both my DirecTV HD DVR and my Sony PlayStation 3, and it worked great with both. My only issue with this input is that there’s no decent cable management for it, whereas all the other ports on the computer are neatly tucked behind a cover, this cable ends up sticking out of the side of the display. That said, It’s a minor complaint. More computers need to include this feature. There’s also a component RCA and stereo audio input there too, but I’m not really looking forward to watching crappy old video signals on a beautiful 1920 x 1080 LCD, are you? On the other hand, God of War III looks mighty nice. 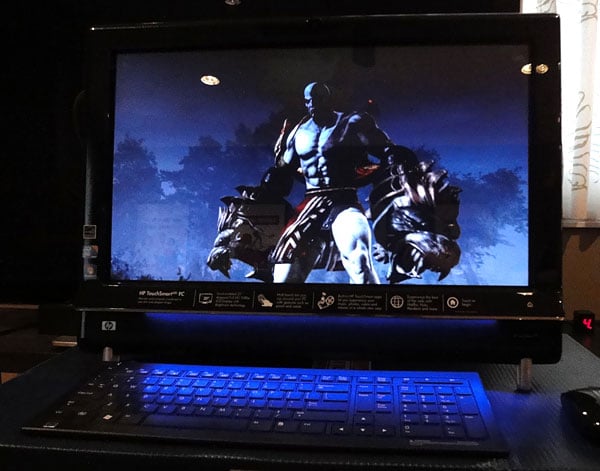 Overall, I’d say the TouchSmart 600 is a fine performer for watching and recording television programs, and there are numerous choices for how you get your digital content into the system. I wouldn’t say it’s an ideal living room system because of the relatively small screen size, for a bedroom or office, it’s perfect. And while the TouchSmart software itself may not be as refined as Windows Media Center for TV viewing, the hardware is quite capable, and it’s your choice which interface to use.

Over the next few days, I’ll be talking about my experiences with movies and streamed content, as well as music and audio on the system. Be sure to swing by again for more details. And if you’re really attentive, you’ve got a chance to win a TouchSmart 600 for yourself.