The number of just plain stupid gadgets that you can buy and connect to your USB port is bewildering. The new Pepper Mouth concept gadget is one of the dumbest I have seen though. It assumes we want to stop calling the idiots we talk to on IM or in chat session’s names and cursing at them. Isn’t that one of the best things about forums and chat rooms after all? You can call an asshole an asshole and not worry that you will get maimed in the process. 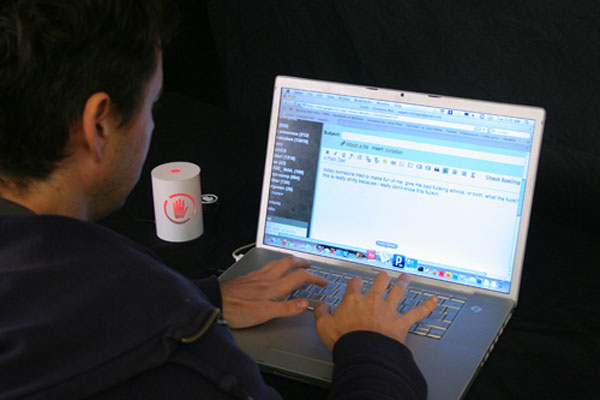 If you have the online version of Tourette Syndrome and just can’t control your foul language outbursts, this little USB thingy would stink you out as punishment. The first time it senses a bad word you get the red stop hand glowing.

The second time it emits a stench of some sort. Being that it’s called Pepper Mouth, it’s supposed smell like a spicy pepper. That won’t stop some folks from cursing; peppers may remind them of home cooking or something (or getting arrested). The smell lingers too, sort of like farts after a day of beer drinking. Sounds great.